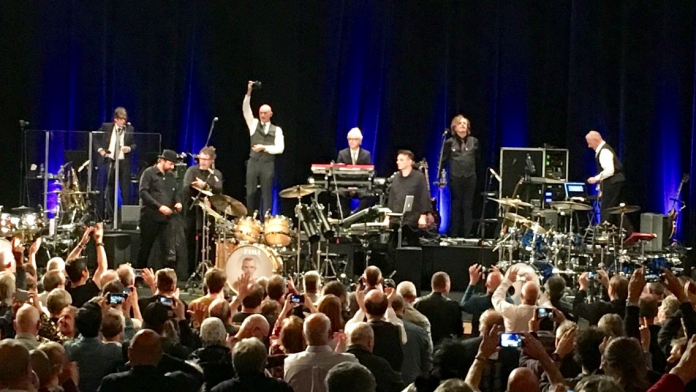 It’s fair to say that the 2018 UK Tour from King Crimson was without doubt one of the most eagerly awaited tours of the Prog year……and with the wide eyed approval and much nodding of heads as we left the building it certainly lived up to all expectations.

The show was split into two halves and really was the perfect King Crimson compilation….with tracks like ‘Moonchild’, ‘Larks Tongues In Aspic’, ‘Cirkus’, ‘In The Court Of The Crimson King’, ‘Islands’…..and that was just during the first half.

But this show is about so much more than just the tracks…..it’s a real music masterclass and I have to say it’s a privilege to see performers like this at the very top of their game, I always find it difficult not to concentrate on Tony Levin such is the brilliance of the man but the interaction between drummers Harrison & Mastelotto was mesmeric at so many times during the show that it was tough to look beyond the drummers who were positioned at the front of the stage.

I’ve seen shows when great musicians are doing nothing more than to quote that fine film ‘The Commitments’….’Musical W**king’ but that certainly wasn’t the case here, the guys on stage were utterly magnificent and the packed Symphony Hall crowd lapped it up throughout the near three hour show…..they could have played longer, we really wouldn’t have minded at all.

The second half of the show was another plethora of mind blowing music to thrill, entertain and at times utterly bewilder a very appreciative audience, tracks such as ‘Epitaph’, ‘Easy Money’, ‘Radical Action’, ‘Neurotica’ were a joy to behold but IMHO the best was yet to come with an utterly stunning version of ‘Starless’ from the album ‘Red’ which I personally believe should be in every Prog fans collection.

The Prog Classic ‘21st Century Schizoid Man’ closed the evening in dramatic fashion with an absolutely staggering version of the track originally released on the ‘Crimson King’ album…..but I doubt it’s ever sounded as good as it has on this tour, it was a fitting end to a spectacular evening.

I saw the bands last tour two years ago and although it was a wonderful show it really wasn’t a patch on the show on this current tour…..this had everything you wanted, a little bit more and then some.