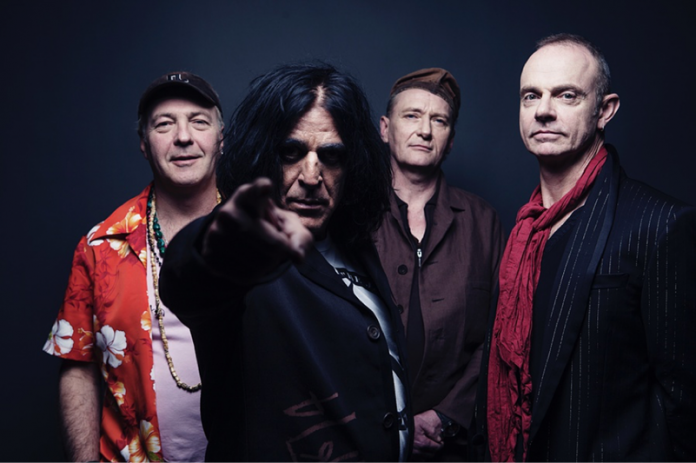 Tickets on sale today for London gig – plus new video
Killing Joke unveil a new video for New Cold War taken from their latest album Pylon on Spinefarm Records, and announce that they will headline a special headline show at London O2 Academy Brixton for Friday November 4th. This special one-off event will take place under ‘The Great Gathering’ banner, with a carefully selected supporting cast set to be announced in due course…
Tickets for the Brixton show go on sale this Friday, April 1st via http://bit.ly/KJbrixton.
Says guitarist Geordie: “We’re really looking forward to pulling out some surprises for an uplifting new live set!”
Killing Joke are also playing the Bearded Theory Festival in May and the Rockaway Beach Festival in October.
Pylon is Killing Joke’s 16th studio album and entered the UK charts at No. 16 giving the band their highest official chart entry in 21 years and third highest ever.
Pylon was produced in the UK and Prague by the band and Tom Dalgety, whose credits include the hugely successful Royal Blood album, and isn’t designed to accompany a quiet night at home in front of the fire; Pylon is very much music as ritual – raw, uncompromising and precisely-targeted lyrically, with the artwork put together by the aforementioned Mike Coles, the designer behind the very first Killing Joke album.
Killing Joke – Jaz Coleman, Geordie, Youth & Big Paul, the original line-up – are currently delivering the best and most relevant material of their career, with no mellowing or softening of the edges getting in the way.
Killing Joke Brixton ‘The Great Gathering’ Show
November Fri 4th
Tickets on sale Friday 1st April at 10am  – www.myticket.co.uk / www.seetickets.com
Killing Joke UK festival appearances
May
Thur 26th      Bearded Theory Festival
http://www.beardedtheory.co.uk/
October
Sat 8th          Rockaway Beach Butlin’s, Bognor Regis
http://www.rockawaybeach.co.uk/killing-joke-1/