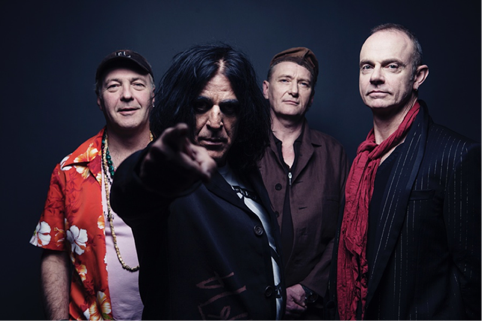 Killing Joke unveil the new video
Killing Joke’s ‘Pylon‘, released on Spinefarm Records, debuted at #16, the band’s highest official UK chart entry in 21 years and their third highest ever.
The Euphoria video, produced by Craig Gowans, features live footage from Killing Joke’s most recent headline UK tour at the tail end of 2015, and follows the animism theme of the song, dealing with man’s connection to the universe and relationship with nature.
Following an avalanche of critical acclaim, Killing Joke’s Pylon featured heavily in the critics’ End Of Year polls for 2015, including Rolling Stone Magazine, Classic Rock, Metal Hammer and Vive Le Rock, who made it their Album Of The Year.
Pylon was produced in the UK and Prague by the band and Tom Dalgety, whose credits include the hugely successful Royal Blood album, and isn’t designed to accompany a quiet night at home in front of the fire; Pylon is very much music as ritual – raw, uncompromising and precisely-targeted lyrically, with the artwork put together by regular band associate Mike Coles, the designer behind the very first KJ album.
Killing Joke are now delivering the best and most relevant material of their career, with no mellowing or softening of the edges, and with the original line-up of Jaz Coleman, Geordie, Youth & Big Paul continuing to hold firm; with so much wind in their sails, 2016 promises to be an exciting new chapter for this unique band…