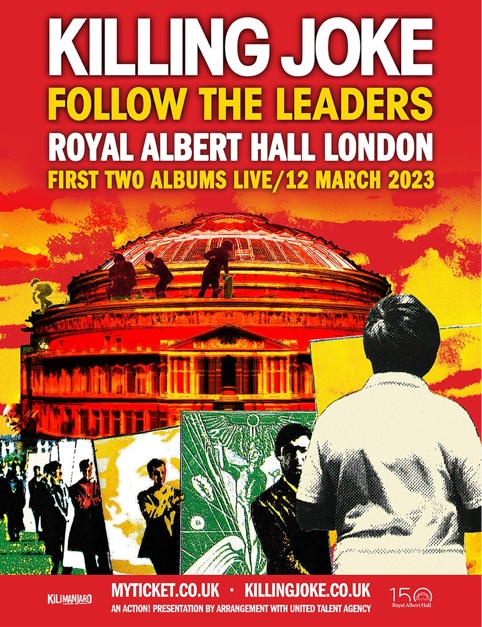 Killing Joke  are proud to announce ‘Killing Joke – Follow The Leaders‘, a very special UK show at the Royal Albert Hall on March 12th 2023. Killing Joke will be performing their first two albums in their entirety; 1980’s self titled debut album followed by their second album “What’s This For…!”
“We are living in the most dangerous period in human history in which extinction from nuclear war  could happen in the next twelve months. If we make it, then Killing Joke at the Albert hall in 2023 will give great meaning and comfort to all of us. Come share a moment in history with the prophetic and legendary Killing Joke.” Dr. Jaz Coleman.
Tickets for “Killing Joke – Follow The Leaders” at the Royal Albert Hall go on sale on Friday 1st July via:- myticket.co.uk/artists/killing-joke
Killing Joke are currently working on a new album, following the release of ‘Lord Of Chaos‘ EP via Spinefarm Records, their first new material in over seven years.
Watch now Killing Joke’s latest video, the apocalyptic ‘Lord Of Chaos’ :- https://www.youtube.com/watch?v=SSVjEc5rIMc, taken from the EP.
To purchase / stream the ‘Lord of Chaos’ EP go to: https://KillingJoke.lnk.to/LordOfChaosPR
Killing Joke is very much music as ritual – raw, uncompromising and precisely-targeted lyrically; proof that Jaz Coleman, Geordie, Youth & Big Paul, the original Killing Jokepersonnel, are currently delivering the best and most relevant material of their career, with no mellowing or softening of the edges getting in the way.With collective nostrils flared and righteous anger carried torch-high, Killing Joke continue to take their music of resistance to fresh levels, both in the studio and out on the road. Follow the leaders……………