One of Norway’s leading extreme metal bands, Keep Of Kalessin, are now ready to announce the release of their next epic masterpiece; Epistemology! The release date is set to February 16th 2015.

The band are excited, saying: “Prepare to be blown away with jaw dropping guitar riffs and drums of doom!”

They elaborate further and add: “This album is an epic battle scene for the listener!” 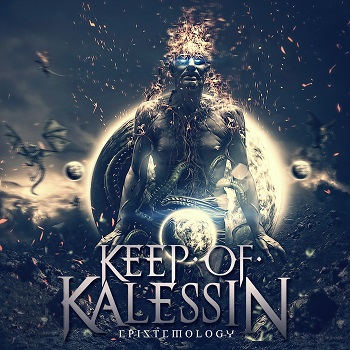 The epic artwork is a result of a cover contest hosted by Keep Of Kalessin earlier this year. Here’s vocalist and guitarist Obsidian’s winner-announcement:

“This time around we wanted to do something different when it came to choosing the cover for our new album. So instead of hiring a designer ourselves, we wanted to include our facebook community in the process.

We decided to make a contest on facebook where designers could upload cover designs and our fans could vote for their favorites. The band would then choose the final design amongst the top 3 designs voted by the fans.

Not sure if this would work in regards to bringing good designers onboard and enough engagement from our fans, we’re now simply amazed of the turnout in this contest!

With more than a hundred covers submitted and simply mind-blowing designs as well as tens of thousands of votes we’re humbled and extremely grateful for the engagement our community has shown. We have discovered new, amazing talents and we have found the perfect cover artwork for our new album!

As we’re now ready to announce the winner of the contest, we first want to say the following about the winning designer:

The design fits perfectly with the album title “Epistemology” and is literally a mind-blowing design!
The designer has proven to be extremely helpful and reliable to work with.
Within just a few days, the designer has put together full booklet and artwork for several versions of the album incl. CD, Digipak and Vinyl with a great focus on building a design that fits to the lyrics.
So with this, we could not be more happy with the turnout of our contest and we hereby give you the winning design made by Designations Artwork – Jean Michel.