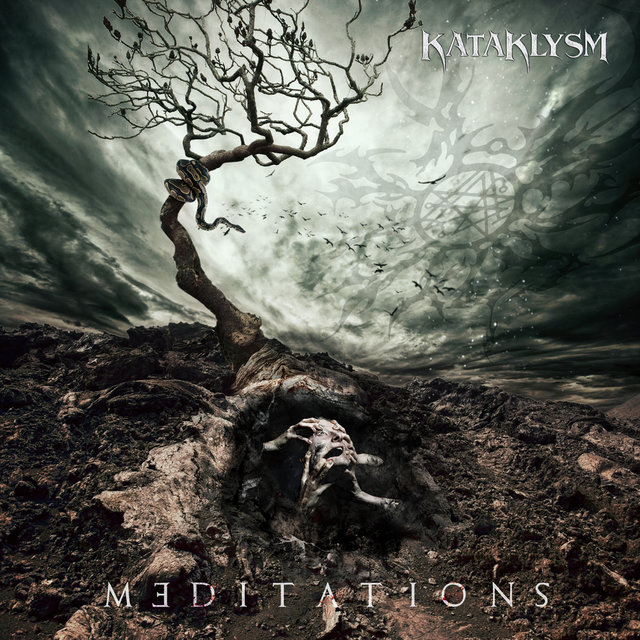 Canadian hyperblasters KATAKLYSM have completed work on their latest effort, ‘Meditations’ – the soon to be released album which consists of 10 blistering tracks. Produced by the band’s own guitarist J-F Dagenais and drummer Oli Beaudoin, the record was mixed by Jay Ruston (ANTHRAX, STONE SOUR a.o.). Mastering duties were handled by Paul Logus (PANTERA a.o.).

Today, the band are pleased to unveil the ‘Meditations’ cover artwork, which can be seen above. It was created by Ocvlta Designs by Surtsey, who also crafted the artwork for KATAKLYSM‘s previous record, ‘Of Ghosts And Gods’.

Singer Maurizio Iacono commented, “This is a very personal album to me with old wounds being revisited – I felt a big urge to pour my soul into this release. The boys and I were isolated under the same roof during the writing process, just like we did in the early days…with no worries except having fun, being honest and delivering a serious album that represents us today but respects our past. Our new story is coming and we are eager to share it with you!”

‘Meditations’ marks the return to old work ethics. All four band members wrote and composed together under the same roof for the first time in over a decade and returned to the old days of songwriting efforts which saw the band’s classics such as ‘Shadows & Dust’, ‘Serenity In Fire’and ‘In The Arms Of Devastation’ come to life.

Born in 1992 from the cold winds of Montréal, Québec, Canada comes one of the country’s top extreme musical exports to date: KATAKLYSM. With a career spanning 25 years, KATAKLYSM is a leading force in the most brutal & powerful genre in heavy metal and has conquered territories such as Europe, North & South America, Australia, and Asia while recently becoming the first Canadian metal band to ever play South Africa.

They’ve spent the last 25 years cementing their legacy in the extreme metal genre. 2016 marked a whirlwind of excitement as the band added a Juno Award to their collection as well as landing their highest Billboard charting. They are one of a handful of bands that have the title of“Longest Standing Artist” on the Nuclear Blast roster.