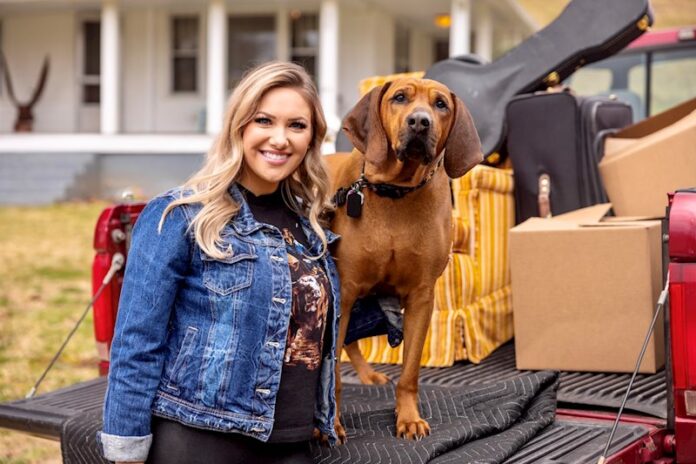 Kaitlyn Baker Releases Her New Single ‘Hound Dog’ Ahead of her UK C2C Festival appearance
Virginia-born, now Nashville-based, fast-rising star Kaitlyn Baker — flagged up as one of the “Top 10 Country Artists to Watch” by The Huffington Post — releases her latest single ‘Hound Dog’. What’s more, it has just been announced that she is to play the prestigious C2C Festival so will be over in the UK later in March (further details below).

Kaitlyn explains the inspiration behind her latest song, ‘Hound Dog’: “My husband — Joe Lasher — and I are both singer/songwriters and thanks to the COVID situation, like a lot of folks, we had a lot of time at home. We started writing a bunch of songs together and this one was just so fun. It was refreshing to record a song that allowed me to channel a more traditional country and honkytonk side of my music.”

“What you get with ’Hound Dog’ is a fun, quirky, and upbeat song. It is a new take on the ‘he did you wrong’ story.  It’s playful and packs a lot of attitude!”
It sure does, showing Kaitlyn’s talent for sharp, super-sassy lyrics:
“You’re out there burning up the trail /running around on me/Your tail’s been a-wagging and your tongue’s been a dragging/While you’re barking up a tree/ I’m sick and tired of being sick and tired/of cleaning these ole bed sheets/’Cause one of them bitches you’ve been laying with infested you with fleas.”

Opening with deft guitar picking, setting a lively tempo for the first verse’s hook, plus some cheeky keyboard phrases for good measure, ‘Hound Dog’ brings in Kaitlyn’s fun vocals which are classic Nashville strong, pure and nuanced but with unapologetic relish and mischief generously added in. “A voice that’s a dead ringer for Carrie Underwood’s,” said pop culture website BuzzFeed, listing Kaitlyn Baker as one of the “11 Badass Alternatives to Bro Country That You Need in Your Life.”

The track builds, brings all the artists together, and you can just hear the fun they’re having filling The Shop Studio in Candler, North Carolina. Kaitlyn Baker provides Lead and Background vocals, (plus end of track laughter), aided and abetted by Jonathan Brown (on keys); Duncan Mullins (bass); Jeremy Medkiff (electric & acoustic guitar) and Tony Creasman (drums).

Kaitlyn will soon be returning to the UK to play C2C Country to Country 2022 and is eager to do so.

“I traveled to London back in 2020 to play C2C and when everything started shutting down, things changed very quickly,” she remembers, “I was very fortunate that I was still able to play a show with King Calaway at All Bar One back in March 2020. We sold out the show that night. I had so many people singing my songs and at that moment I realized that the UK has some of the biggest country music fans I had ever seen. I was absolutely blown away. So, with all of that being said, I am overjoyed to be coming back and to be able to play this year’s C2C.”

See C2C’s website for full details of the dates, venues and stages that Kaitlyn will be playing at https://c2c-countrytocountry.com/london/line-up/
Check out ‘Hound Dog’, released now on all digital platforms and you’ll understand why it’s no wonder Dayton Daily News described Kaitlyn Baker as “One of country music’s fastest rising stars” whilst Got Country remarked on her talent for “Feisty ultimatum songs”, not to mention her “Sassy, sweet, Southern grace.”