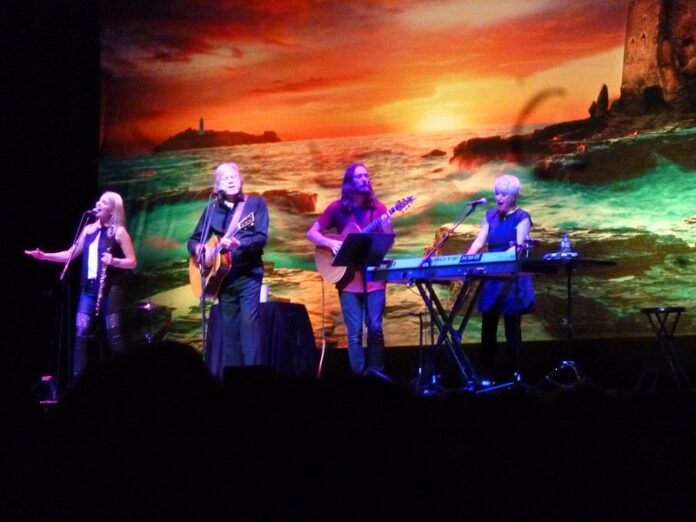 I was speaking to my father in law the other day about going to see Justin Hayward and he shared that he saw The Moody Blues at the Town Hall just after they released `Days of Future Past`. Indeed, the singer himself mentioned that he`d played this grade one listed building during his time with the Moody Blues and it made a big impression on his fellow bandmates as being from Birmingham they`d previously played more intimate local venues such as The Belfry and Mothers.

There`s little fuss as this unassuming singer-songwriter walks on stage and opens with `The Eastern Sun` to this packed venue holding around a thousand expectant fans this evening.

Julie Ragins (keyboards and backing vocals), Karmen Gould (flute, percussion, and backings vocals) and Mike Dawes: (acoustic and electric guitars) join the singer and remain for the majority of this ninety minute set. We have a few Moody Blues numbers with the ballad like `Driftwood`, wonderfully dreamy and introspective `Tuesday Afternoon`, `The Actor` with some delightful flute tinges and `Hope and Pray`

In the lead in to the reflective `The Western Sky` the singer reminisced about his early trips with the Moodie`s to America and visiting Elvis`s home in Tupelo and Buddy Holly`s high school in Lubbock and you realise that even musical heroes, have their own musical heroes. Justin`s latest single `Living For Love` gets an airing and it`s up there with what you`d expect from this seasoned troubadour One of my all-time favourite numbers `Forever Autumn` from Jeff Wayne’s Musical Version of The War of the Worlds almost silences the venue and proves what an intense and emotive song such as this can do.

The home stretch incorporates a few more Moody Blues tracks which includes `Question` which has all and sundry clapping along before closing with the timeless masterpiece `Nights In White Satin` which to me seems to encapsulate the sixties.

The quartet return for a three song encore which comprised the powerful  `I Know You`re Out There Somewhere` before Justin is left alone to finish this evening`s entertainment with `I Just Don’t Care` before taking his bows and leaving.

Tonight, was one of those shows that you appreciate more the following day when you`ve really had time to fully digest and reflect back. Justin Hayward is a tremendous songwriter and his voice still retains that rich and deep resonance. The performance gave a flavour of this artists varied musical range and what struck me was his humility when stepping aside to let his fellow musicians enjoy their time in the spotlight. This modest singer songwriter is definitely one of our underappreciated National Treasures. There are a few more dates on this rare UK tour so I’d encourage you to seize the opportunity as i guarantee you`ll be richly rewarded.