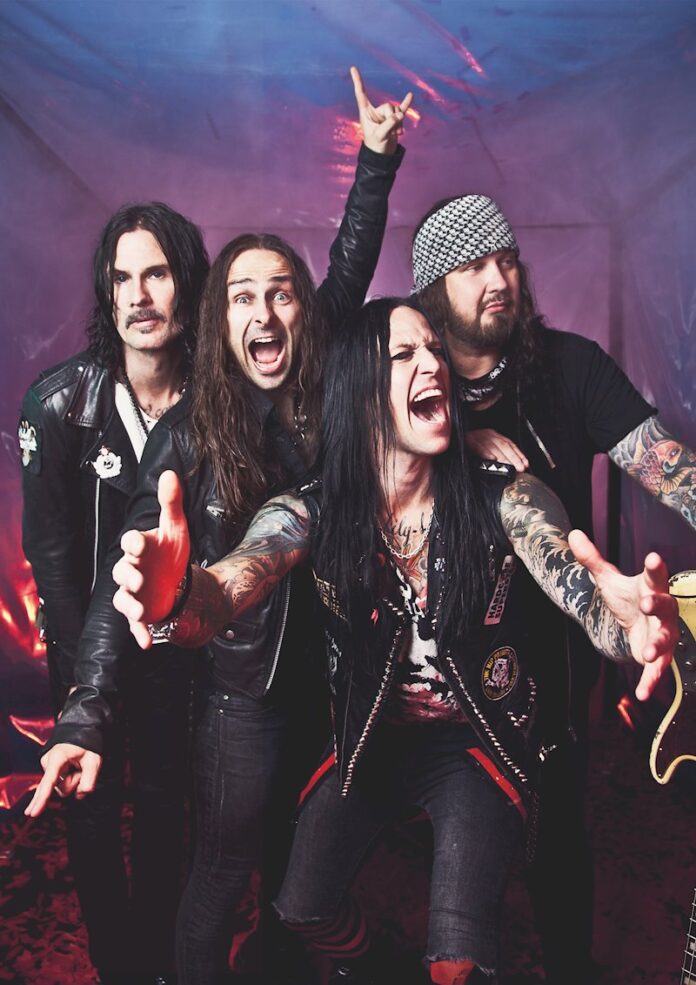 Abrakadabra is the upcoming album from Gothenburg’s leading exponents of street metal, HARDCORE SUPERSTAR! The follow up to 2018’s critically acclaimed You Can’t Kill My Rock ‘N’ Roll, Abrakadabra will be released digitally via Golden Robot Records (for USA, Canada, Australia, New Zealand and South America only) on March 25th, 2022 and is available for Pre-order / Pre-save now!

HARDCORE SUPERSTAR has recently released 4 alcohol fuelled, riff laden singles ‘Catch Me If You Can’, ‘Dreams In Red’, ‘Weep When You Die’ and ‘Forever and a Day’!

But they aren’t stopping there in the lead up and will release another uplifting single ‘Fighter’ on February 18th that will be available on all digital platforms.

How do you follow up the runaway success of 4 singles that have already exceeded well over 1 million plays on Spotify alone…Maybe it’s time to release a ballad?

However, if you know HARDCORE SUPERSTAR then you know that they’re not going to conform to any stereotypical expectations of what a ballad should sound like. In an age ruled by influencers and haters projecting false interpretations of reality, Fighter is a song of positivity and self-recognition; encouraging the listener to define their own destiny rather than listening to those who want to hold you back, throwing shade on your dreams.

Watch ‘Catch Me If You Can’ HERE
Starting off with an intricate 12 string introduction before vocalist Jocke Berg weaves a story of initial self-doubt that evolves into an unstoppable drive and commitment to achieving your goals, ‘Fighter’ is in many ways semi-autobiographical for HARDCORE SUPERSTAR, charting the defiance and drive that has seen them evolve and succeed where many of their contemporaries have fallen. This rebellious confidence sets the tone perfectly for the release of their new album “ABRAKADABRA” on March 25th and gives a clear indication of how the band are setting out to make 2022 their biggest and best yet!

The success and acclaim of You Can’t Kill My Rock N’ Roll inspired the band significantly and writing for the next record enthusiastically started whilst out on tour. Connecting with so many fans, old and new has helped to influence the shape and sound of the new record, with drummer Adde commenting that the new album “feels like the record we should have released after the Black album“.

Watch ‘Weep When You Die’ HERE
Abrakadabra will be released worldwide in March 2022, containing 10 hard hitting songs exploding with riffs, attitude, intensity and that magical feeling you get when your work is over and the weekend is here. This is an album for the fans and best shared with great friends, cold beers and very loud-speakers!

Watch ‘Forever and a Day’ HERE
Recorded in 2020 and 2021 at both Österlyckan and Bombastik in Musikens Hus – Gothenburg, the decision was made early on to once again work with Johan Reiven, who was responsible for production duties on the bands ‘Black Album’. Adde states “Working with Johan was like stepping back in time, there’s a shared intensity and commitment to excel that collectively drives us and ultimately brings out the best in us all… I am 100% happy with the result”.

This shared intensity can be heard on every one of the tracks from the defiantly rebellious ‘Dreams in Red’ through to the bar-soaked philosophy of ‘One For All’ and the thundering powerhouse that is ‘Catch Me If You Can’.

Abrakadabra is uncomplicated, rock n’ roll escapism and entertainment at its best… sprinkled with a little bit of magic for good measure.