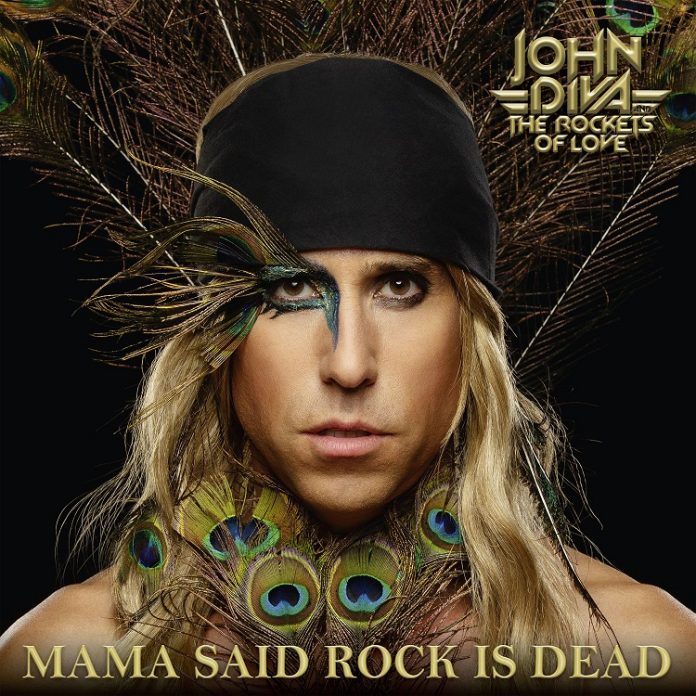 The first song on “Mama Said Rock Is Dead”, is called “Whiplash”, and guess what, it starts with a whip crack. Some 40 odd minutes later comes the closer, “Rocket Of Love”. The chorus for it goes like this.

“Alright, shoot it up, I’m a-gonna hit you with my rocket of love”.

Lucky then that joining Diva on this endeavour are The Rockets Of Love. It is instructive, perhaps, to know their names.  Just to be clear, you’ve got Snake Rocket and J.J. Love playing the guitars, bassist is Remmie Martin and drummer Lee Stingray jr. completes the set.

Yeah, I know what you’re thinking and I had to check too. But, yeah, honest its actually 2019.

On Thursday evenings when I was a little boy in the mid-1980s, the library in the town where I live used to open late and I’d go with my father every other week. Dad used to get his novels for the next fortnight and I’d take my £2 pocket money and get four albums. The cool stuff I picked up then, Van Halen, AC/DC, Faster Pussycat, Kiss (Jovi were my boys already by ’86) is all the way through this too, so much so, actually, that you find yourself rifling through your Tuff CD’s, The Dangerous Toys, and myriad others that you’d forgotten you had.

Indeed, you can actually pick the influences out for many of these 12 tracks. “Whiplash”, we’ve already discussed, but it owes DLR era Van Halen such a debt that you wouldn’t be surprised if Eddie sent the bailiff’s round, to be fair. “Your lips, my sweat,” offers Diva at one point in this, “dipped in honey and made me wet”. Even Alice Cooper in “Trash” might have blushed at singing this.

The first concert I was meant to go to was Dave Lee Roth on the “Little Ain’t Enough” tour (we didn’t go in the end and had to wait for Skid Row the following year) “Lolita” should have been on that record, right after “Sensible Shoes”.

It’ll take you about five seconds to work out that “Wild Life” is desperate to be a Thin Lizzy tune, “Blinded” really does sound like an outtake from “Slippery When Wet” too. The angel smile is being sold here and no mistake.

“Dance Dirty” comes on like you imagined it would –  let’s be totally honest here having the words “baby nymphomaniac” in a song in the 21st century is, as my Scottish friend would say, absolute pish – but then it is about pole dancing and it sounds almost exactly like Def Leppard, so Diva, probably doesn’t have a toss to give.

There’s a big power ballad (of course there is) and “Just A Night Away” seems set to break into Heart’s “Alone” at one point, and if someone said Whitesnake had nipped in to record “Get It On” then I wouldn’t be remotely surprised.

Look, to be clear, I loved this stuff as a kid too. I still know every word of the first three Poison albums, I’ve seen Cinderella play in Las Vegas, and I feel fully qualified to point out the similarities between “Long Legs” and Danger Danger, but whether its enough in 2019, I’ll leave up to you.

Diva apparently “wrote stadium rock for the stars” and he’s damn good at it too. The irony is that just ever so occasionally “Mama Said Rock Is Dead” offers something you didn’t expect. There is a NWOBHM touch to “Toxic” (that riff, come on!) “Fire Eyes” and its interesting rhythms and huge intent take us to different places too.

Best of all, perhaps, is “Rock N Roll Heaven”. Something a little bluesy, a little reflective and truly from the heart. Part Kid Rock and part New Roses, it is the only time this breathes new life into anything here.

But then, “Mama Said Rock Is Dead” wasn’t meant to. This was a group of talented blokes playing the music they love. Trouble is that mostly it sounds as if they’re paying homage to the greats rather than reaching for greatness themselves.

Previous article
SO TELL ME WY-MANS
Next article
ROYAL TUSK, ON REFLECTION