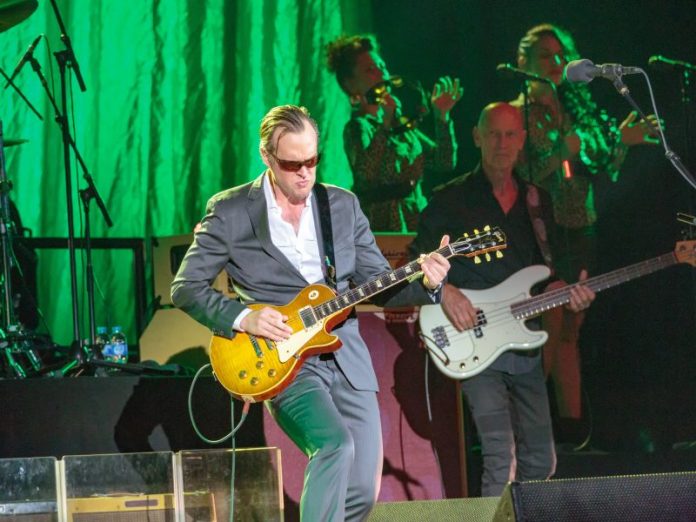 The king of modern blues pushes the boundaries

There are many things written and said about Joe Bonamassa. This website has proclaimed him as the king of modern blues on numerous occasions, his shows are incredible, his projects – however multifarious – are always shot through with a quality that arguably no one else can match. Hell, the band he’s in, Black Country Communion, walked off with my album of the year award last year too.

But there’s something that gets a little overlooked. His bravery as a performer. Not for him the idea that you come out, play some hits, wave to the people and walk off again. Instead, he does what he wants and it just so happens that he is so good that he carries the public along with him.

Take tonight. Tonight is not one of his shows that celebrate the past of the blues, or rock n roll in general, as his Three Kings gigs did or his British Invasion run 18 months or so ago, instead this is resolutely about the future.

Literally, too, given that the first four songs tonight – to a packed arena no less – are all unreleased. And why? Well like the third of them is entitled “Just Because You Can”, that’s why. There is a sultry, almost funky air about this one too, in sharp contrast with the bass groove of “Evil Mama” which precedes it. The key to the evening, however, arguably comes in the very first song “King Bee Shakedown”. Because for these gigs Bonamassa is backed with a seven piece band of rare skill and distinction and the horns of Lee Thornburg and Paulie Cerra carry the thing just as much as the main man’s guitar, and the horns as well as the wonderful backing singers Jade MacRae and Juanita Tippins all of whom were on the “Live At The Greek Theatre”CD and all of whom are integral to the vibe here.

Bonamassa’s flying V guitar heralds a switch of direction and his rendition of Albert King’s “I Get Evil” shows him to be one of the great interpreters of songs, before a pair from his most recent solo affair “Blues Of Desperation”. “No Good Place For The Lonely” shows the slick band, all dancing away in unison, while the absolutely magnificent “How Deep This River Runs” shows them all in full flight and it is a copper bottomed highlight.

That ends the first half, if you will, because the wonderful Bernie Marsden appears to trade licks with Joe on “Breaking Up Somebody’s Home”. Actually it is striking how readily Bonamassa – although clearly the star – is happy to play second fiddle. Not least on “Slow Train” which is mostly sung by MacRae and Tippins, as well as being propelled by the incomparable Reese Wynans on keyboards.

“Driving Towards Daylight” builds and broods and there’s a couple of Led Zep covers either side of “Last Kiss” – which sees the seated crowd beckoned to stand and receives an injection of energy. “Boogie With Stu” turns the Genting into a huge honky tonk, while “How Many More Times” sees most of the band depart, leaving just four – bass player Michael Rhodes and drummer Anton Fig join JB and Wynans – to distil rock n roll to its most basic, before the guitarist lets himself go with a quite brilliant solo.

As if to emphasise the feeling of anything goes that permeates tonight, the encore isn’t “Sloe Gin” but instead a cover of Leon Russell’s “Hummingbird”, which wings its way in on a pretty soulful flight.

It brings the curtain down on an evening that emphasises that we are living at the same time as one who will go down as an all time great. Supremely talented but never to the detriment of his songs, Joe Bonamassa understands the history of the music he plays,  but wants to forge his own legacy. He’ll keep taking chances to do that too – and he always seems to get it right.