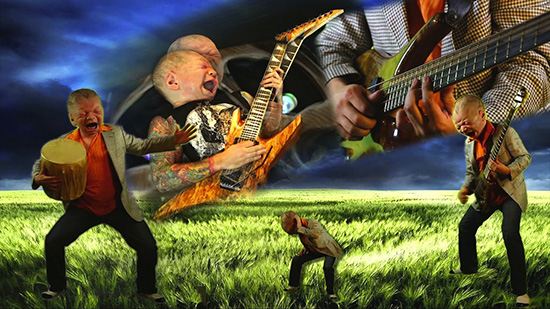 Fans of Job for a Cowboy are likely familiar with bassist Nick Schendzielo’s over-the-top youtube channel, Bassfordays, and he’s back at it again with another weird bass video. This time,Revocations‘ Dave Davidson lends his guitar talent for “Newborns“. Watch it now at your own risk.

“Sun Eater,” the fourth full-length album from Job for a Cowboy, was released in 2014 via Metal Blade Records worldwide. The response to the record was overwhelmingly positive, with Decibel Magazine conceding and saying “Fuck it, I can admit when I’m wrong… Turns out that, while I was busy pointedly not paying attention to them, these deathcore progenitors actually became a pretty damn good band.” Alternative Press Magazine also declared in their 4.5/5 star review that “they’ve become a full-on progressive death metal band…the songs have progressive sweep and epic power, at times recalling Opeth’s heavier work…Sun Eater is one of 2014’s best metal albums, period.” Praise for “Sun Eater” burned through blogosphere and resonated with fans. “Sun Eater” debuted at #91 on the Billboard Top 200, and #5 on the Billboard Hard Music albums chart. On the day of release, the album was #2 on the iTunes metal charts. Listen to “Sun of Nihility” and order your copy of Job for a Cowboy‘s “Sun Eater” now at metalblade.com/jobforacowboy.