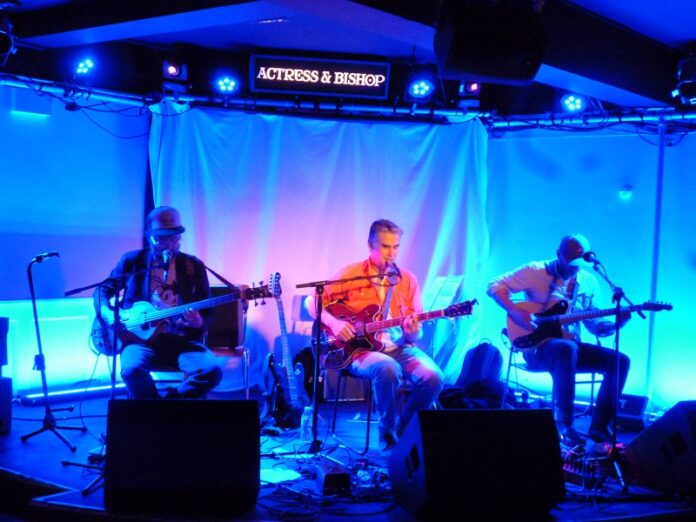 American singer-songwriter and guitarist Jim White has lived a full life and has at times been a Professional surfer, comedian, fashion model, New York City cab driver, boxer, and a preacher. He`s promoted as somebody who blends American musical traditions with a surreal wit and the literary sensibilities of Southern Gothic authors. In other words, he shares songs written, inspired partly by life experiences in an interesting and enter4taining manner. This singer-songwriter released an album called `Misfit’s Jubilee` in 2020 which was reflective of the political atmosphere of the U.S. at that point in time. Tonight, Jim is accompanied by two gifted Flemish musicians with Geert Hellings and Nicolas Rombouts who played on his latest album.

The trio are seated and open this nigh on two hour set with `Take Me Away` a number that relates to the dangers of religion, in this instance Pentecostal and how it sent somebody to being sectioned. An amusing but cautionary tale which has a cracking harmonica segment shared towards the end.

`The Divided States of America` from the latest release is up next and it really speaks for itself. As it ends the singer says that he feels his country is now a theocracy and says “what the fuck happened to that country” before adding, quite righty that we have our own problems here in the UK. We head back over twenty years for the reflective `Corvair` and stay with the same album for `Bound to Forget` which has an almost dissolute Ry Cooder vibe when shared live.

A song that the singer says if you`ve come to be depressed is your go to song follows with `Plywood Superman` a compelling tale of despair. We hear `Wonders Never Cease` before `Static On The Radio` a song that had Aimee Mann on co-vocals and was a number that was used on the ending credits for El Camino: A Breaking Bad Movie, a neo-Western crime thriller.

`A Perfect Day to Chase Tornados` is given an airing and it`s the song that found its way to David Byrne (Talking Heads) on a cassette and drew the artist to take Jim on tour and put up the money for his debut album. The singer relates that he was in a difficult place in his life with mental health issues, being almost destitute and had considered suicide. We have a kind of interlude with the instrumental `The Hop Song` which followed a story of the singer attempting to play this track to the director of the Amsterdam Conservatoire without success.

We have a couple of numbers from the latest release with the upbeat `Sum Of What We’ve Been` and `Smart‐Ass Reply` which came from dreams that the artist had with its melodica solo towards the end.

A favourite track of mine, the sing a long `If Jesus Drove a Motorhome` gets the audience joining in which is quickly followed by `My Life’s A Stolen Picture` before the show is closed out with a cover of Talking Heads `Once In A Lifetime` but set to Jim`s musical interpretation including the addition of a flute. A really interesting and captivating version, if not entirely orthodox.

Geert and Nicolas leave the stage and Jim plays one final number which is in essence the encore which is the stunning `Chase The Dark Away` .

The show was over but the singer was happy to sign merch and was to auction his shirt and hat, which he has done each night on the tour with the proceeds being donated to Médecins Sans Frontières or Doctors Without Borders, an international humanitarian medical non-governmental organisation who provide medical assistance to people affected by conflict, epidemics, and disasters.

It`s been nearly a decade since I last saw Jim White and it was as good as I remembered with amusing but thought provoking stories and quirky songs that have an underlying message. Once again I left a Jim White show feeling a real life affirmation sense within myself. There are very few artists these days that can really reach in and touch your soul so he`s very much, in my opinion, an artist to treasure.