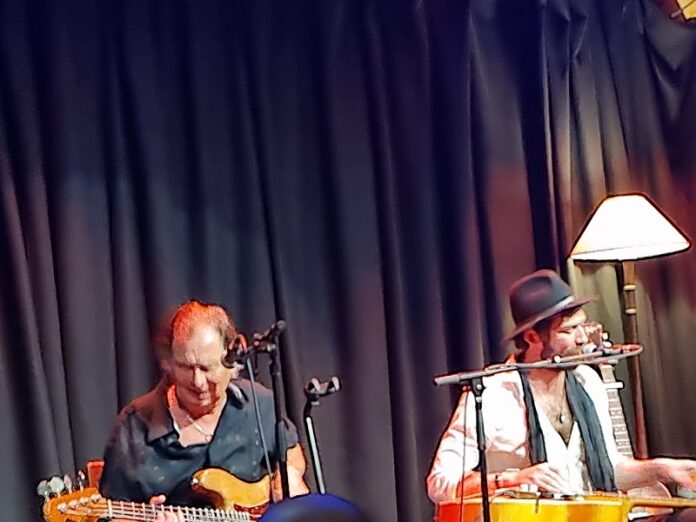 I’ll be honest, on the list of things I was expecting tonight, an instrumental acoustic cover of Van Halen’s “Jump” wasn’t top of the list. However, as Mike Dawes puts it himself, he’s not your conventional solo guitarist. Not only is he supremely skilled, but he’s got a lovely warm, welcoming manner that you can’t help but like. Beginning with “a song I worked on as a kid in my bedroom”, “Boogie Shred”, most of his work is interpretations (a bit like that one of Van Halen) of songs that you didn’t imagine you’d be seeing. John Mayer’s “Slow Dancing In A Burning Room” is one of them, but there can’t be many of this audience that are overly familiar with The 1975, never mind their song “Be My Mistake”. He sits down for this because “acoustic players have to be occasionally artistically pensive”, but he’s a Jack In A Box and can’t stay still for long. Playing a Don Ross tune, “Tight Trite Night” is a nod to one his heroes, but the way he does “All Along The Watchtower” and “Purple Rain” are a world away from the bombast of Hendrix and Prince. Dawes – who had been on tour with Justin Hayward in Alabama as recently as Saturday – is wonderful here, and his talent shines through.

There’s a real friendly atmosphere in Peggy’s Skylight tonight, but it’s literally true to say that he’s amongst friends tonight. His grandma is in the crowd, as is his aunt, his cousin and cousin in law, most important though, is his dad Mickey, right next to him.

The two make for a stunning team. Jack playing his slide on Canned Heat’s “On The Road Again”, with his father his foil. The slide guitar style is unbelievable, and even a broken string in “Making My Way” cannot derail this.

Instead, they play a simply lovely cover of Little Feat’s “Willin’” before Mick is dispatched to fix it (“it’s what dad’s do” he laughs) and Broadbent Jnr hurtles through “Leaving Blues”. There’s time for a new song too, a confessional “Better Man”, perhaps the darkest moment of the evening.

They are – although they don’t seem natural salesman – here to plug Jack’s stunning new record “Ride” and the selection they play from that one, including “Midnight Radio” and “New Orleans” (“this is a jazz club, so I’ve got to play some jazz…..nice!” says JB) not only show how good this collection is, but also in this stripped down setting, show different sides of the songs.

“Don’t Be Lonesome” – from one of his earlier records – is done solo, and shows the raw, almost desolate quality of this style of playing, before the pair are reunited for “Grace.”

Jack in particular seems naturally charismatic, and with the air of a star, and the encore suits him. It’s good fun, too. With he and his dad laughing their way through “Hit The Road Jack” as if they were at a family get together rather than a concert.

That’s a lovely vibe to have and it makes this show totally different to any other you’ll see. Three musicians’ over two sets with a supreme skill that few could match, yet giving the impression that they are busking outside in the warm summer evening. Truly wonderful.