IT’S GOT TO BE PERFECT 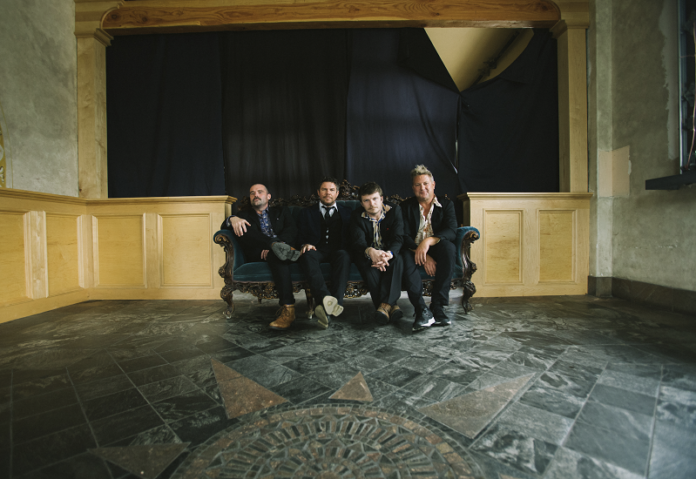 As their second studio album inches into sight, BANDAID BRIGADE release a fresh taster of what to expect with: “Perfect”.

The latest sneak-peak into the band’s forthcoming second album Sex Is Terrifying (out 26 August, via Xtra Mile Recordings), new single “Perfect” is a stomping, glam-rock tinted, feel-good anthem just ripe for the summer. It comes hot on the heels of carefree recent singles “Abacus” and “Hit The Buck”.

A “Perfect” track born from a less-than-perfect start to the recording of their new album, Brian Wahlstrom remembers of writing the single:

“Luckily, due to our miscommunication skills, we accidentally showed up two days early in New Orleans to record the album. We all of a sudden had a few days off to ‘get acclimated’ to the city, and write a few more songs in Zach’s living room. Rucker had this one in his back pocket, it was perfect.”

The new music today also arrives with the announcement of UK live dates, with Bandaid Brigade due to hit the road for a string of UK shows the week after the release of Sex Is Terrifying. Also appearing at Frank Turner’s Lost Evenings, the band will also be supporting Xtra Mile labelmates Skinny Lister at a number of shows across the EU too. Full dates and details are listed below:

Bandaid Brigade is a collaboration between musicians Zach Quinn (PEARS) and Brian Wahlstrom (Scorpios, Gods of Mount Olympus). Dubbing themselves “Yacht Punks”, the band produce music with powerful choruses and soaring melodies, injected with Eighties synths, plaintive punk guitars and self-deprecating but poignantly poetic lyrics. Serving as an outlet for all the music that both Quinn and Wahlstrom personally enjoy such as Billy Joel and Elton John, Bandaid Brigade is a refreshing project for both musicians to experiment without the constraints of their affiliations.

Recorded at High Tower Studios by James Whitten and mixed at The Blasting Room by Chris Beeble, Sex Is Terrifying is the follow-up to their 2020 debut I’m Separate. A cohesive collection of whatever it is that makes Bandaid Brigade songs Bandaid Brigade songs, the result is a glorious mix of the band’s heritage with a number of surprises thrown in for good measure.

Whether it’s the catchy grooves of “Hit The Buck” or the upbeat loneliness of “Loveless Love” — whose lyrics give this record its title — the forlorn yet anthemic fragility of “Like A Stone” or the sumptuously soul-tinged “Broken Toy,” the driven defiance of “Abacus” or the buoyant but existential optimism of “Did You Dream?”, Sex Is Terrifying is a record whose songs navigate to both the extreme highs and abject depths of human existence. Intended as a kind of antidote to the mixed-up world we live in, Sex Is Terrifying hits the shelves on 26 August via Xtra Mile Recordings.

Previous article
FAST LANE
Next article
GET INTIMATE WITH THE PIXIES