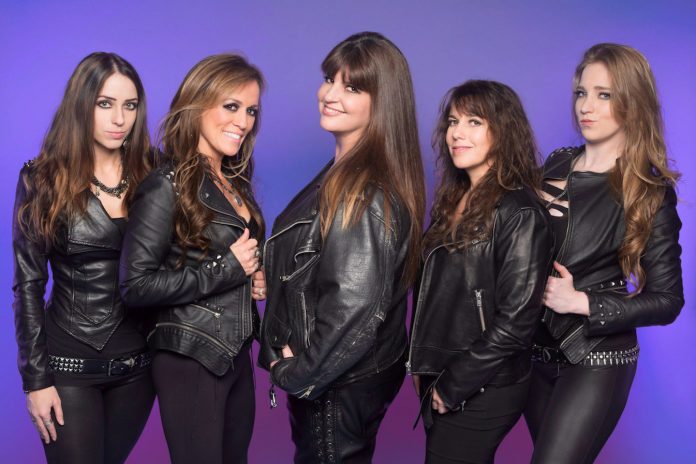 June 30, 2017
Reading time: 3 min.
Facebook
Twitter
Pinterest
WhatsApp
Linkedin
Email
Print
Telegram
Copy URL
By Andy Thorley
Run to the Hills: The Iron Maidens are back in town!
After their triumphant UK debut in 2016, the worlds one and only all-female Iron Maiden tribute return to our shores in October, and this time theyre here to conquer the land of their idols
beyond London.
Frontwoman Kirsten Chickinson cant hide her excitement: Having played the UK last year – and even getting to meet some of the original members of Iron Maiden – was a dream come true.  So returning to Iron Maiden Holy Land to play even more UK dates really takes the biscuit!  I can’t say I’ll have my pilot’s license in time to fly us over but maybe they’ll let me drive the lorry between shows!. Chickinson and her hot troopers have announced a five date tour, which will see them bringing their electrifying live extravaganza back to the capitals O2 Islington Academy and to Leamington Spa, Cardiff, Sheffield and Reading.
Overwhelmed by the enthusiastic fans reception, Linda comments Playing our very first show in London last year was an energetic kick in the butt! Some of the audience traveled from quite far, we understand, to make this one special show. They were absolutely AMAZING! It took us 15 years to finally get here and we are SO glad to announce our return with 5 shows this time!
Book now and get ready to scream for the loudest, sexiest and most talented metal maidens
either side of the pond!
Tickets are onsale now, details and booking info as follows:
DATE CITY VENUE BOOKINGS
October
Wed 25th Cardiff The Globe https://goo.gl/6TBMiB
Thur 26th Reading Sub 89 https://goo.gl/dkCZu1
Fri 27th Leamington Spa Assembly https://goo.gl/CrjFG0
Sat 28th Sheffield Plug https://goo.gl/pdrDwd
Sun 29th London O2 Islington Academy https://goo.gl/z7ykPw

London tickets are £20.00 (subject to booking fee) Doors 7pm. See venue websites for other times and prices. Buy tickets here:http://www.ticketmaster.co.uk/event/1F005268A7AE4535
The Iron Maidens are Kirsten Bruce Chickinson Rosenberg on vocals, Linda Nikki McBURRain McDonald on drums, Nikki Davina Murray Stringfield, Courtney Adriana Smith Cox on guitars and Wanda Steph Harris Ortiz on bass. All band members are highly trained professionals with diversified musical backgrounds, ranging from orchestral and musical theater to blues and rock.
Formed in 2001 in Southern California, they have quickly established themselves as one of the most notorious tribute act in the US, progressively expanding their fame far and beyond the Americas. They have conquered the attention of fans and fellow musicians with their musical prowess and electrifying live shows, where they perform hits and fan favourites from all phases of Iron Maidens career with appearances by mascot Eddie, the grim reaper, the devil and more.
The Iron Maidens have been joined on stage by the likes of Alex Skolnik from Testament, Lemmy, Megadeths Dave Ellefson, Anthrax Scott Ian and Judas Priests Tim Ripper Owens. They were chosen to support Danzig, Cypress Hill, Snoop Dogg, Nightwish and Nevermore amongst others. Theyve been featured in Playboy and Hustler as well as Rolling Stone, Guitar World and Drum magazine.
Up the Irons!
www.theironmaidens.com
Previous article
Slip It In
Next article
More Stories