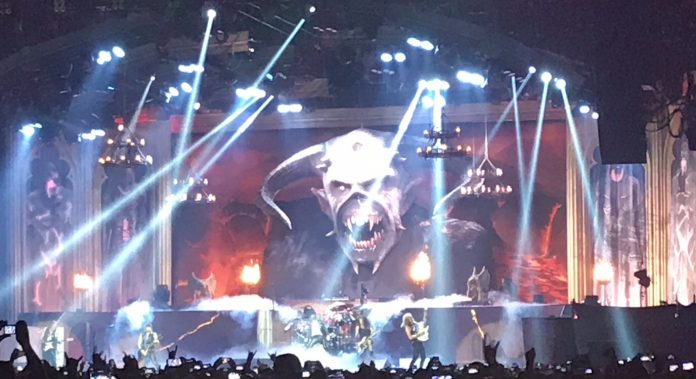 To be honest, that seven words could be all this review needs, but specifically here, there is no band better than Iron Maiden at preserving their legacy.

If last years tour was all about “The Book Of Souls” album, then this is a celebration. A celebration of their music – hell, it’s our music, look at the number of Maiden t-shirts here and tell me this isn’t the most partisan gig crowd you will ever see – but it’s much , much more. It’s a celebration of the power of music to cross boundaries and bring people together.

And its all set to a show that is – even by the standards of Eddie and The Boys – spectacular.

After the usual UFO opening – “Doctor Doctor” oddly never ever sounds better than here – there’s Churchil’s speech to usher in the start of “Aces High”, but there’s pomp and ceremony. There’s a lifesize model of a Spitfire flying about too.

Indeed, the early part of the show is mostly about war. “Where Eagles Dare” and “Two Minutes To Midnight” are both short, sharp and yet joyous. Largely because Bruce Dickinson (60 this evening) is at his imperious best. He is to metal what Jagger is to The Stones: He’s his own man – as the Biggles hat in the opener suggests – but there’s no one to touch him.

The legacy name of this tour gives the beast the chance to dust off some they haven’t played in years – “The Clansman” is  a centrepiece along with “Sign Of The Cross”  (on a personal level I hope that it opens the minds of many to the fact that the two albums they made with Blaze Bayley in the 90s have some corking songs on) – “For The Greater Good Of God” (I guess I should whisper it quietly but the album it comes off “A Matter Of Life And Death” is my favourite) and “Revelations”.

These are mixed in with “The Trooper” which sees Eddie’s first appearance of the evening, “The Wicker Man” which is the epitome of a fists in the air singalong, and a phenomenal “Flight Of Icarus” which is part metal song, part theatre, put wholly brilliant.

That one heralds a change of gear as “Fear Of The Dark” does what only it can do – and sees Dickinson in a quite stupendous mask and dinner jacket ensemble – but tonight it segues not into “Iron Maiden” but to “Number Of The Beast” which almost literally explodes here.

Their title song is next  – blow up Eddie and all – and the encore finds yet another gear. “The Evil That Men Do” has seldom sounded livelier than this, “Hallowed Be Thy Name” is from the very top draw and then there’s a song about white men coming across the sea, bringing pain and misery. You may know it? It is one of the most glorious things in the history of recorded music when that drum beat rolls.

And speaking of the drums: I’ve seen Iron Maiden getting on for twenty times in my life and they have never sounded bigger than this. They are thunderous here, they really are. Harris on the bass, Nicko on the drums, they are sonically spectacular. Plus, the three guitarists who compliment each other so superbly. Smith is the cool one, Murray the understated genius, Gers the mad professor. They’ve got it all covered.

But it is the end perhaps, of “Run To The Hills” that sums them up better than anything. Amidst it all, they still find the time for panto as Dickinson sets off the last explosion with a cartoon style TNT tube, and somehow its perfect. Iron Maiden know its entertainment, its not serious and they don’t take it seriously. They are though the greatest beast that ever did live. And this is their legacy.