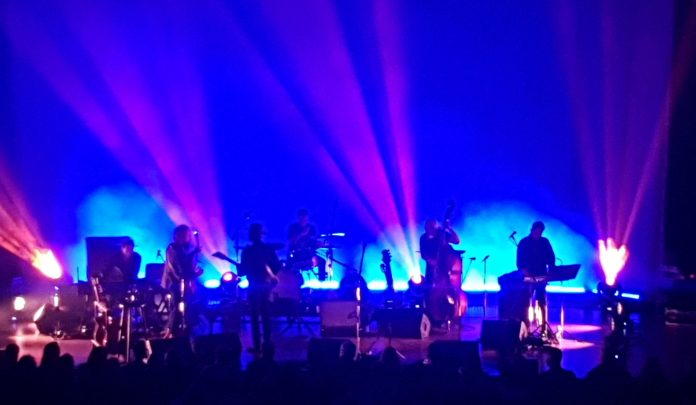 It was, wasn’t it, that princess of pop, Billie Piper that put it best. “Because we want to”. The title of that hit from when she was a schoolgirl, seems to best sum this up.

Why do Iron and Wine and Calexico make these records together? Why do they come and play them live? And nothing is better really, than music for music’s sake. Just because.

When they released their full-length record in 2019 in the summer, it had been a follow up to the EP they’d done 14 years before, and “Years To Burn” was a lovely thing.

It needed to be played live, too.

Watching them do it, the likes of “Midnight Sun” have a subtlety, a beguiling warmth, that you hoped they would, that they needed to have, almost.

A friendship, a bond between Sam Beam and his partners here seems unbreakable, and that friendship extends to the bands picking each others songs to play. Iron And Wine wants to play “The Sunken Walls” so they do, but these – and the others – are just a smattering in amongst the glorious new stuff.

“The Bitter Suite”, played here in full, is the first taste of the kind of jamming that Gov’t Mule would approve of, but the variation is astonishing in this 90 minutes or so.

So it is that there’s covers of Lucinda Williams (“I Lost It”) and Echo And The Bunnymen (“Bring On The Dancing Horses”) in amongst the mariachi flavours of “Flores Y Tamales”, one of the many that feature the trumpet of Martin Wenk.

This nestles with a particularly impressive acoustic section with just Sam Beam and Joey Buns, with “Falling From The Sky” and “Bitter Truth” benefitting from the intimate way of playing them.

But when the band as a whole are in full flight, crikey they are mighty. The title track of the new record is a real gem, a piercing lead guitar from Burns taking this to a place where the others didn’t go.

Only once or twice does it stray – for my money at least – into something a little self-indulgent. Personally, I could have done without the bass-solo that went into something a little more free form jazz than the rest (although Scott Colberg’s work was certainly skilful), largely it was a wonderful night, exemplified by perhaps the best thing on offer, a rollocking “History Of Lovers” – the title track of that 2004 EP, and the dry as dust Americana strains of “In Your Own Time” which ends the thing.

The encore which follows, is more of the same, and “Father Mountain” – one of the very best of the new cuts is likewise here too.

At the end of it, Burns waves cheerily and Beam says: “thanks for coming, that was fun.” It really was, both for the bands and the crowd, and that is something truly worth celebrating.

Previous article
BELLADONNA LOOKING AT THE STARS
Next article
BAND OF THE DAY: WAITING FOR MONDAY