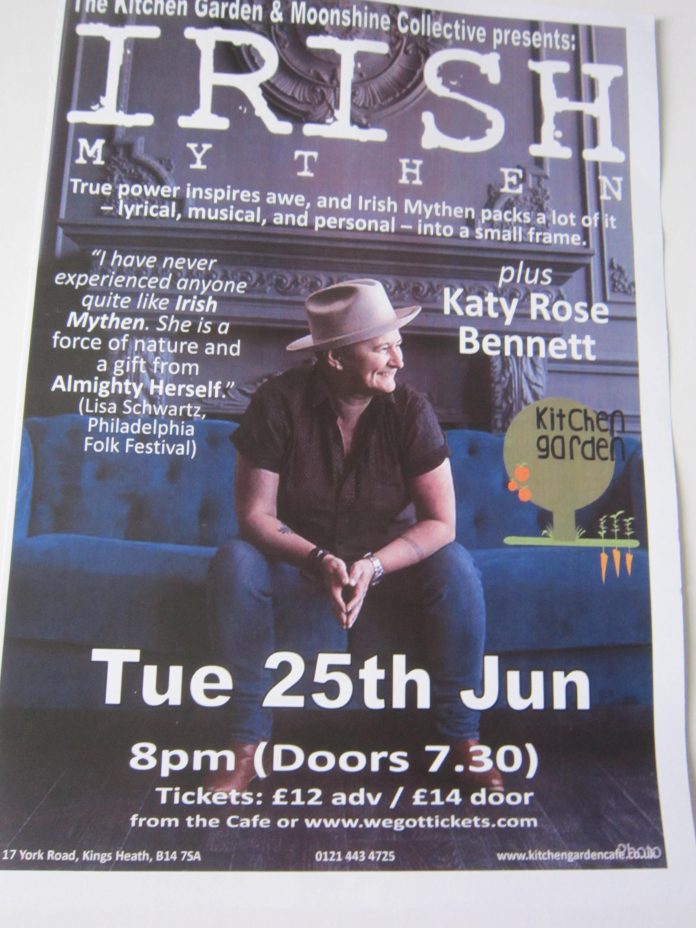 The older I get, i`m in my sixth decade now, the more difficult I find it to motivate myself to head out to a gig I fancy, especially on a cold and wet evening. I`ve found the answer seems to be to buy an advanced ticket, then you really have to go. Tonight, i`m so grateful for this odd but effective technique.

Jane Irish Theresa Monica Bernadette Mythen, otherwise known as Irish Mythen, is an award-winning folk singer, born in Enniscorthy in Ireland and now residing in Charlottetown Prince Edward Island Canada. I`d heard some of her music, seen a few live clips and thought, the combination of this lady in the intimate setting of the Kitchen Garden Café had to be a winner and so it proved to be.

Irish has recently released her fourth album “Little Bones”, which has just entered the Canadian top ten, so this is quite a coupe for the KG Cafe to acquire her services.

The show is split into two sets with a short break between as Irish opens with the heart-breaking `Gypsy Dancer` and the first thing you notice is how strong and wonderfully clear her voice is. Irish is a born storyteller, comedian and keen political observer come commentator, which has gotten her into trouble at times. She introduces `Be Still, Dance` with a nod to the Trump situation in America and also signals to what we could receive with the potential of Mr Johnson in charge before dedicating `Let them In` to her young Syrian neighbour Basil, back in Canada. A thought-provoking song and my favourite from the latest release. If you get to see a live show, i`m sure Irish will share her experience of playing this song in front of some important dignitaries in the Southern Hemisphere. `Sweet Necessity` a song that could have been written by Van Morrison. The love song `Did You Ever` and `Tullamore Blues` close out the first section. The final song written about the aftereffects of over participation of the triple distilled whiskey which is produced in the small Offaly town bearing it`s name. The birthplace of Irish`s mother who said the spirit was only good for stripping paint and starting tractors. It may well be good for both but having imbibed of this drink first-hand, it`s one of my favourite top shelf tipples.

We return and are offered a few really sensitive tunes beginning with `Four Walls`, `Fathers Song` about her father Paddy. A song that really touched me as it expressed an awful lot about my own relationship with my father, who passed away over fifteen years ago and `55 Years` this written about a festival goer Irish met, who had lost his wife after fifty-five tears together. The next song `Jesus` could be divisive but as we hear two Bishops have asked Irish to perform this song and one in a Cathedral so that`s good enough for me. All good things must come to an end and tonight does with a song written for Irish`s favourite Aunty Maria after her passing, simply called `Maria` and the Brendan Behan classic ballad `The Auld Triangle` which she performs acapella style.

Well tonight was a real treat for those that packed out the KG Café, This lady is a real Powerhouse force of nature, who offered us inspiring and thoughtful songs and life stories. She played the Black Deer Americana festival near Royal Tunbridge Wells at the weekend and people had travelled from there after witnessing her performance, along with a couple who had made the journey from Wales.

So there`s a recommendation if any was needed. Irish is an artist that performs songs that will touch your spirit. She has three or four shows left in the UK before she heads back to North America. Make the effort to attend. An emotional night will be guaranteed.