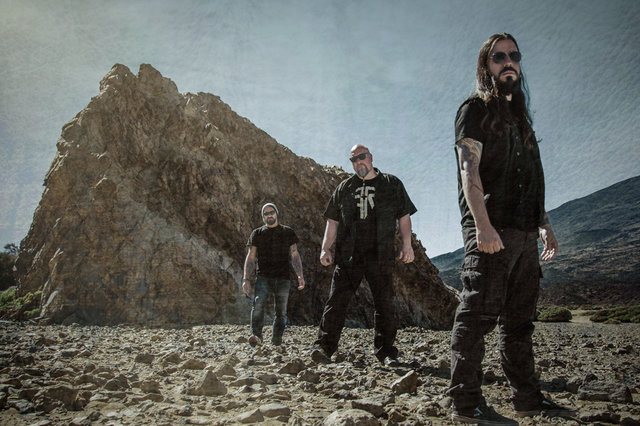 The creativity and productivity of the German heavy metal trio RAGE seems to have no limits. Only 14 months after the successful ‘The Devil Strikes Again’ neckbreaker, RAGE deliver their new, 23rd studio album called ‘Seasons Of The Black’, which will be released on July 28th!

“Our fans are getting RAGE metal of the very first grade. We’ve been able to bring the band’s typical trademarks into eleven new songs, and we’re sticking to the course that we forged on the last album! This means hard and very catchy compositions that also sound thrash, aggressive and epic”, tells band leader Peavy.

“This song attracted our attention already whilst the pre-production so we decided to take this as our first single back then”, remembers Peavy and tells about the shooting of the video: “We recorded the video in Madrid, Spain with the famous company of SOBER guitarist Jorge Escobedo (From Hell Pictures). The lyrics as well as the clip deal with the so-called ‘Butterfly effect’. In the end, all of our actions will come back to us and I think this is really well shown in pictures with the story of the robber and murderer in our video.”

In addition, the album is now available for pre-order. You can purchase it in the following formats:

Below you can see the track listing of the new album as well as the bonus tracks:

These bonus tracks originate from the time when RAGE was still called AVENGER. Peavy comments: “It was really nice to re-record the songs from my first years of being a musician! I remember quite well how the songs were created. I always thought that it’s a pity that most of the people don’t know these songs, just because they were released with another band name. For me it was always clear that these songs are kind of timeless and when we played them together it was really awesome! Back then, we couldn’t realise our ideas as good as today. When you listen to the new recordings you will recognize how fantastic these songs really are!”

‘Seasons Of The Black’ was recorded in February / March 2017 at Megafon Studios (Burscheid, Germany) and at Soundchaser Studios (Zandhoven, Belgium). Its production was handled by RAGE, whilst the renowned Dan Swanö (MARDUK, OPETH, KATATONIA) took care of the mix and mastering at Unisound Studios (Grefrath, Germany).