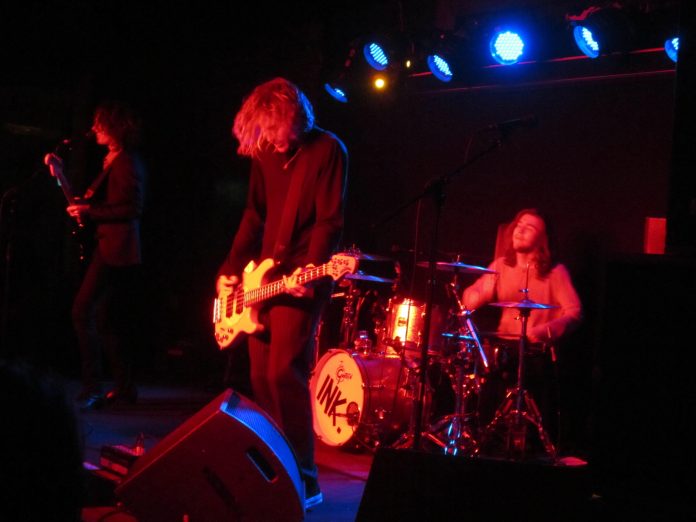 Right before they play their last song, “Heaven”, Ink. Bass player Dougie Poynter hits the nail squarely on the head. The four-stringer – rather an ebullient, extrovert character – shouts: “thanks for coming, it means a lot to us that you can come out to see a band you don’t know….”

He’s right too, because Ink are really, to be honest, the sort of band that should be playing support slots at this stage, and to be equally honest, they might actually be better suited to that right now. But they are beyond the usual level because Dougie Poynter is the sometime bass player in A….

OK, I am being facetious, and it is a fair bet that I might well be the only person in the sizeable crowd who isn’t too familiar with the pop stylings of McFly, the band that Poynter is mainly in (he really was in A earlier in the year) and is solely here because Ink’s EP, released earlier in the spring, is rather good.

It’s not just the songs from “Heaven” – the only four they’ve released so far – that are so impressive – by any measure “Symphony Woman” is a cracker – but also that the three piece are looking beyond that already.  Of the newbies, “Magic Black” is the perfect vehicle for Todd Dorigo’s deep, rich, Nick Cave-like tones, while the slower “Satellites” is a side of them that needs further exploration.

As they feel obligated to play for an hour – and thus coming back to the point about them headlining at this early stage – there’s a couple of covers. You have to say they are innovative choices though, with Abba’s “Lay Your Love On Me” and Sia’s “Cheap Thrills” given a rock treatment you might not expect.

All of which is indicative of a trio – drummer Corey Alexander rounds out the skilled triumvirate – who are doing this because (as Billie might have said – they want to. Poynter apparently played his first gig in this town years ago, but with even his side project clearly going places, there’ll be many more. Ink are still a work in progress, but one to watch.