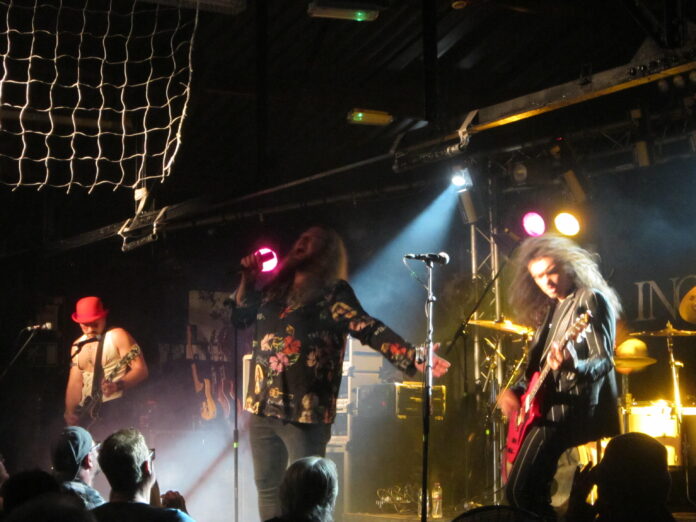 First up tonight is hometown boy Tim Prottey-Jones a multi-instrumentalist, session musician, songwriter, producer, vocalist, band leader and solo artist.  He was previously in UK alt-country band, ‘The Wandering Hearts’ but now flies solo. After sharing a song called `Fire` he confesses that he wasn`t sure if an acoustic A cappella country song was the best way to open a predominantly metal gig. `Good Life` a song written in the wake of the social media outrage surrounding Caroline Flack follows with Tim`s version of a power ballad with `Until I Do`. We get a new song then a cover of Brandi Carlile`s emotive `the Jungle` before this short set closes with `Drinking For Three` a number that is written about the singer`s three year old son and his journey into this world. Tim is back at the Asylum in the new year so catch him here again if you get chance, I can vouch for it being a good night.

I`d just sat down to catch five when Mercutio, a four piece rock band based in London bounded on stage. The current line-up is Ross William Wild on vocals, Fabio Staffieri on guitars, Andrea Lonardi on bass and Edoardo Mariotti on drums. The fellas storm through tracks from their album `Antagonist` and by the time they are on `Playtime` a song about a naughty boy, singer Ross is trying to hang off the A Frame structure which seems to be integral to supporting the venue`s roof.  As he moves into `Chaos In King` a number written on a trip to the Nevada Desert on MDMA apparently, he says that he`s been told to calm down. `Alex` and `C Word` whose title has had to be altered to suit their new label owners close out this fast and furious showcase. Ross is from a theatrical background and uses his learnt skills to good effect.

As the lights dim and the Grandstand theme tune is piped through the pa, a line from the Staind song came to mind “it`s been awhile now, since I first saw you” Indeed it has February 2016 supporting The Winery Dogs was the last time I managed to catch Inglorious.

Today the band have released four studio albums and a covers album titled `Heroine` which has some of it`s profits being donated to Women’s Aid, the national charity working to end domestic abuse against women and children. Tonight, we enjoy a smattering of tracks from all of these albums.

`She Won`t Let You Go` opens the set with its wonderful vocal inflections, a new song which is on the latest release `We Will Ride`. We enjoy a jazzy interlude as a power outage is repaired on stage and we rush into `Messiah` followed by ` Breakaway` from the debut album. Nathan shares the first of four tracks from the covers album with a version of the Miley Cyrus hit ` Midnight Sky`. Two others follow with Heart`s `Barracuda ` and Alanis Morissette`s `Uninvited` before `Where Are You Now` becomes an anthemic singalong.

Nathan invites Phil Beaver from behind his drum kit to pick up a twelve string guitar and join him and Danny Dela Cruz on another acoustic guitar to run through stripped back versions of `Glory Days` and a cover of Cyndi Lauper`s Time After Time`. There`s old and new numbers for the remainder of the set but highlights for me were the bluesy `Medusa` and slow burn `Holy Water` where Danny Dela Cruz offered up a jaw dropping guitar solo. Tim Prottey-Jones joined the guys for the song `Eye Of The Storm` which he co-wrote with Nathan. I think it was on `We Will Ride` where Dan Stevens traded guitar licks with Danny Dela Cruz while Vinnie Colla just thumped away on his bass. The final song `Until I Die` from the debut album brought proceedings to a close and this shattered but sated audience filtered out as Neil Diamond`s `Sweet Caroline` was piped through the speakers.

A cracking ninety minute show delivered by a band that are on the top of their game. It certainly won`t be another five years before I get to see these boys again.