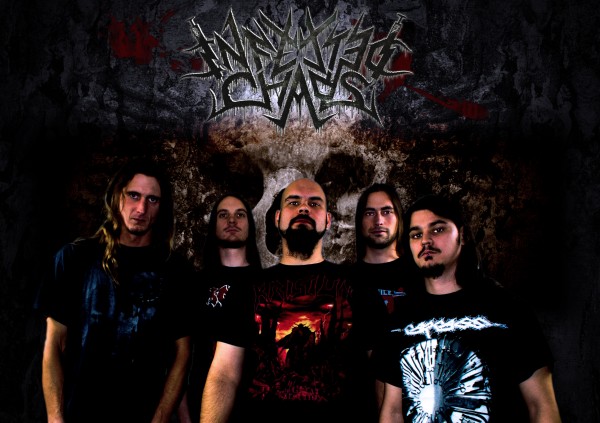 When you ask Infected Chaos to talk about themselves, they aren’t shy. “Well,” they say. “This is the result when guitar acrobats Matthias and Martin and bassman Flo, [a remnant of CHAOSREIGN] pick up a breath of fresh air by integrating two renowned musicians into the structure.”

What it all means in practice is this. The combination from Austria and southern Germany is reinforced, most recently by the experienced drummer Christoph and the growling specialist Christian, both impressing their personal stamp on the already existing material of INFECTED CHAOS.

After many rehearsals and recordings the band went to the famous Iguana Studio in Freiburg, where they were busy with mixing and mastering. The result of it is a Death Metal soup called “The Wake of Ares” and will soon be let loose to crush mankind on festivals and other events. According to a statement by Christoph B. of Iguana Studio, fans of Death Metal can look forward to a tank in the middle of war that incessantly moves toward the front. Similar to DISMEMBER or ENTOMBED, INFECTED CHAOS will soon blast powerful music through your ears!

The Album “The Wake of Ares” is completely self-recorded and produced. With the help from a small community among friends, they were given the opportunity to use decent equipment und recording-rooms and thus were able to create a powerful basic sound. For the mix and mastering the band chose Iguana Studio in Freiburg. Christoph B. has done a great job and came up with an astonishing result.

The main subjects of the album are, again according to the band:  “dealing with suppression, slavery, gaining strength and revolting against it. Therefore INFECTED CHAOS created the fictional underground movement “The Blooddawn Resistance”. We´re living in a world of greed and suppression and The Blooddawn Resistance is the voice of the suppressed, willing to fight the tyrants.”

Only three tracks on the album do not directly refer to this issue. These are “The ninth Circle”, which is simply a song about death, how the ancient greek people could have seen it, “Code of IC”, which is just a simple declaration of love to Death Metal and “Awaking into Nightmare” which deals with what they say is  “a big fuck up INFECTED CHAOS singer had to endure during 2013.”

The album title “The Wake of Ares” can be interpreted on two levels. At first, Ares is kind of an idol, the supreme god of the blooddawn resistance, who is summoned to grant strength and courage in hard times and for the fight. On the other hand it´s a statement of: “We (Infected Chaos) are here now and we came to crush!!”