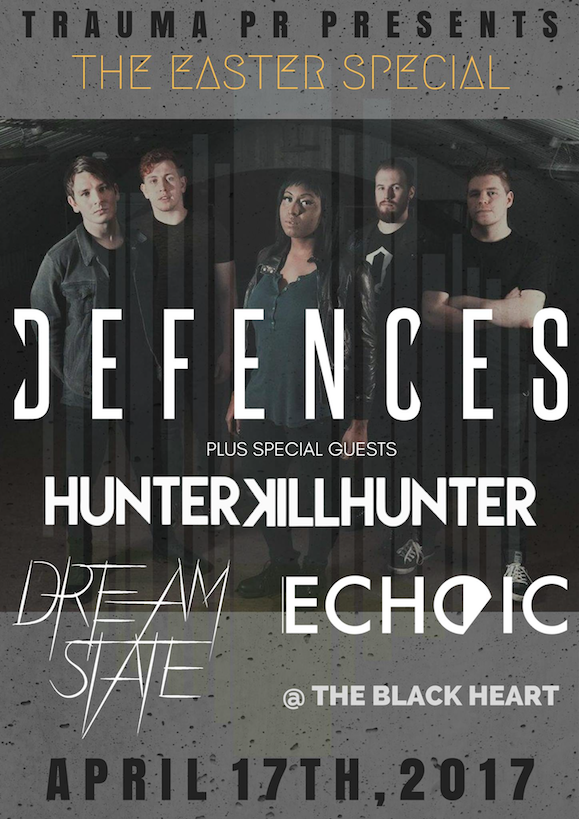 DEFENCES have announced details of a London headline show which takes place at The Black Heart in Camden on Monday 17th April.

The show has been set up in support of  ‘The housing and homelessness charity’ – Shelter, where the band will be donating a percentage of ticket sales and collecting donations on the day of the show to support the charity.

You can purchase tickets for the show here: http://www.ourblackheart.com/events/2017/4/17/trauma-pr-presents-defences

Defences hit home with lyrics based on the struggles that we face in life. The band’s previous single ‘Two Steps Back’ inspires the idea to re-evaluate, regroup and finally reclaim independence in the face of adversity.

Their next single is to create awareness of those involved in the Shelter programme, to not give up when life’s got you down, to get back on your feet and to come out stronger than ever before. Stay tuned for more information.

“We’re delighted to be teaming up with such a long-standing and effective organisation like Shelter. As a band, our take-home message has always been about overcoming adversity in whatever form it presents itself, and with an estimated figure of over 4000 people sleeping rough each night, we feel that supporting a charity like Shelter is a positive step towards tackling that adversity”. – Callum, Guitar and vocals.

‘With Might and Main’ – The album’s title, a phrase meaning “with all one’s strength”, aptly summarises the meaning behind the collection of twelve songs as well as the band’s mantra during the creation process. The album aims to promote positivity, seizing every opportunity and becoming the best possible version of one’s self through its lyrics, backed up by hard-hitting and melodic instrumentals.