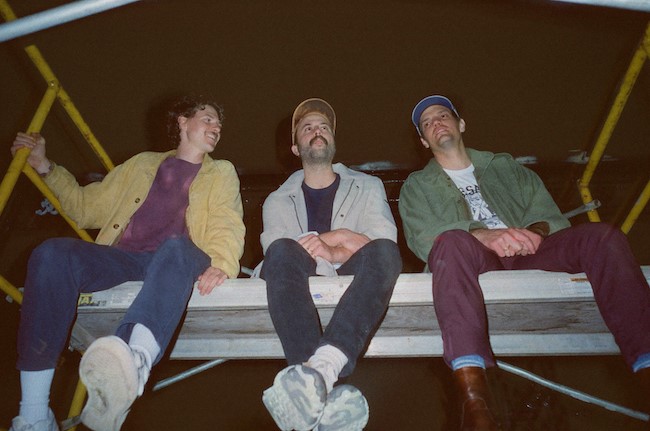 Today, Houndmouth — vocalist/guitarist Matthew Myers, drummer/vocalist Shane Cody, and bassist/vocalist Zak Appleby — share ‘McKenzie’, the second single off their upcoming record, ‘Good For You’. ‘McKenzie’ is a final lamentation of unrequited love: a last nod to shared kisses at the harbor, making ends meet, and nights of couch-crashing after a few too many. As piano sweeps in atop bright guitars and joyous harmonies, Houndmouth closes the chapter on an all-too-casual affair and the attendant recklessness of youth.

‘McKenzie’ is the latest taste of ‘Good For You‘, Houndmouth’s debut release for Dualtone Records out on 5th November. Recorded over the course of a year in lockdown in their Indiana hometown headquarters, a 19th-century shotgun-style home fondly called ‘The Green House’, Houndmouth sought to slip away from the sameness of their quarantine. The band twisted memories from far-flung musical travels past into a new sort of mythical truth — one that shimmered alongside their confined world of glittering, Faberge-spun chandeliers and gold leaf wallpaper.

The result: pure escapism. As heartbreak dances under red skies, Houndmouth emerges in the likeness of werewolves (‘Make it to Midnight’), an intoxicated Cinderella (‘Cool Jam’), or Elvis’ demise (‘Las Vegas’). Banded together in their search for self, ‘Good For You’’ motley cast of characters confront forlorn love affairs and the inherent lonesomeness of aging with fairytale flair.

Houndmouth are currently gearing up for a North-American tour in support of ‘Good For You’, including Webster Hall in NYC, DC’s Lincoln Theater, and two nights at Thalia Hall in Chicago. See full dates below.

Good For You Tracklist:

Make it to Midnight

Previous article
BAND OF THE DAY: SCREENTALK
Next article
WELCOME TO PAVE THE JUNGLE