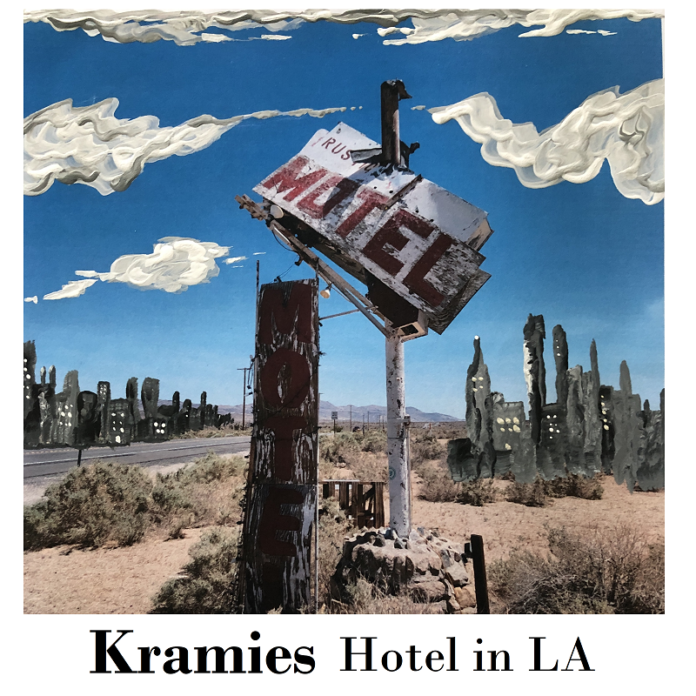 With floaty, faraway vocals gently splicing gauzy, spiralling instrumentals and eerie atmospherics, “Hotel in LA” was written in just an hour, and recorded early in the morning on a balcony overlooking the scenic Blueridge Parkway in North Carolina.

Glimmering with twinkling percussion and folk-tinted flutters, the nostalgic new track feels as though it is tapping into a certain place and time in history, rousing the senses and evoking a long-forgotten collective memory.

Using an old four-track and capturing the track during a rainstorm, a choir of birds that were singing outside at the time can still be heard on the original recording.

Of the new track, Kramies explains:

“I have kept a lot of memorabilia, photos and letters from my past, especially stuff from touring and travels. I’ve had a pretty unique life as an artist so I’m glad every time I move to a new place I find old memories of things I might have otherwise forgotten about. I wrote “Hotel in LA” on a day that I found an old letter from someone I used to care about. It was a fond memory even though it might sound a bit sad. In the letter was a paragraph on how we joked about having to make a hotel that was falling apart in California into something lovely by hanging photos over the cracked and water-stained walls, eventually filling  the walls with a thousand photo frames.”

Initially intended to be a demo, the track was taken into the studio by Kramies’ long-time recording mate David Goodheim and producer Todd Tobias (Guided by Voices, Robert Pollard) to piece together. Kramies adds:

“I’ve never known how these songs come about, but this one was a special moment in time. The letter and lyrics came from the time when I was at the height of my drug addiction before I got clean. The demo was originally titled “Shitty Hotel in LA”, it kind of follows that timeline of  my life where there was a beautiful blur between the lines of what was real and what was nostalgia in the making. I write a lot these days, and the best part is I captured this song on a balcony overlooking the Blueridge Parkway. I’ll never remember how to play it again, which makes it even more like a lost memory caught in time.”

Arriving as a gentle reminder of his  perpetual knack at creating tracks that simultaneously lift your spirits and tug on your heart strings, “Hotel in LA” sees Kramies hold more true than ever to his title as “the dream-pop troubadour.”

“Hotel In LA” is due to appear on Kramies’ upcoming self-titled album. Released on 9 September, ‘Kramies’ will also feature recent singles “Days Of” (featuring Jason Lytle and Patrick Carney of The Black Keys) and “Ohio I’ll Be Fine“. Standby for further details soon…