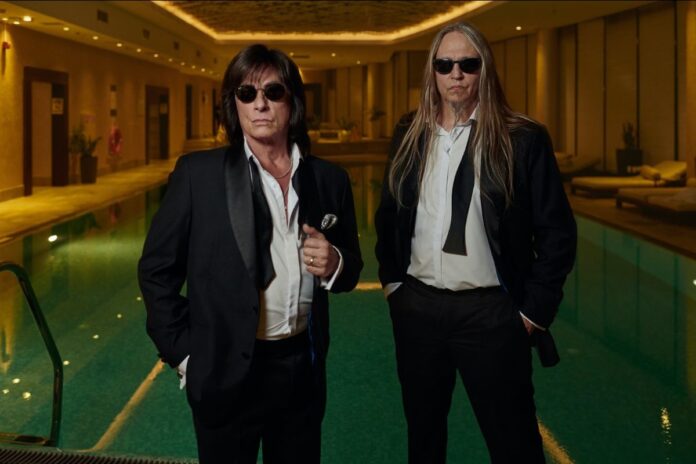 You can pre-order the album here.

Turner has once again collaborated with Wayne Joyner, who created the accompanying visual for the lead reveal “Belly Of The Beast.” He states, “Confucius shared, ‘Signs and symbols rule The World, not words nor laws.’ The Black Sun is an esoteric, occult symbol used by the secret Elite Brotherhood called the Illuminati.  It is a symbol of power, energy, and dominance. Those of us who are familiar with the concept can better understand how the Beast System operates. The agenda is to create a system of global government imposed on the world population known as the New World Order or recently named The Great Reset. The agenda is once again activated to complete this imposed ideology. The Black Sun is on the rise…”

When asked about his collaboration with Joyner, Turner offers, “Our collaboration on the ‘Belly of the Beast’ lyric video was an indelible experience. Wayne completely understands what the vision and purpose of such a medium must communicate to the audience. His professionalism is of the highest caliber and his easy-going personality makes it a pleasure to share ideas. He then sets these ideas into a form creating a visual experience for the musical identity of the song that otherwise would have been lost in audio format only. Wayne makes you hear it, see it and connect to it on a multitude of levels.” Similar sentiments are shared when asked about photographer Agata Nigrovskaya, who captured the portraits presenting his natural likeness timed to the reveal about his life-long condition of alopecia. He states, “Agatha is a very intuitive spirit. She connects with the artist on a deep emotional level and achieves an almost transcendent outcome in her photography. The communication between her and I was unspoken, but understood. Through her sophisticated, raw and fearless approach, she is able to bring the deeper emotions and potential out of her subject. I am so appreciative to have these two creative forces collaborating with me in supporting the upcoming Belly Of The Beast album release.”

The painting that graces the cover of the forthcoming Mascot Label Group debut is the work of Aliaksandr Akutsionak. As Turner shares, “Art should shake you, disturb you, inspire you, and make you feel emotions that penetrate the soul. When Aliaksandr presented me with this painting, I was absolutely moved by it, and knew at once it had to be the cover art for Belly Of The Beast.  It is a perfect visualization of the message and meaning I am trying to portray. He is a gifted young edgy painter, and tattoo artist. His visions and interpretations of his inner self are unique and original. His work transfers his spirit to canvas, and stimulates the imagination of the viewer.”

After selling millions of records, playing to countless fans, and fronting some of the most influential rock bands in history, award-winning songwriter and vocal dynamo Joe Lynn Turner speaks his mind as loudly as possible on his eleventh full-length offering and Mascot Label Group debut, BELLY OF THE BEAST. Joining forces with iconic producer Peter Tägtgren [Hypocrisy, PAIN, Lindemann], the New Jersey-born powerhouse conjures up the kind of heavy metal that not only makes you throw your fist in the air, but also makes you think.

In 2017, he initially met Peter after performing at his brother’s private birthday party. Soon later, Joe and Peter collaborated on their first track “Don’t Fear the Dark,” cementing their creative partnership and assembling what would become Belly Of The Beast.

“It happened completely by accident, but some of the best things happen by accident,” Joe notes. “I was not very familiar with Peter’s bands Pain and Hypocrisy, but when we met, I loved his personality, and I felt like we had a chemistry together. On the writing side, you have to change and grow to mature. I had this in me. As far as pushing into a heavy vein, Peter said, ‘Joe adapted his voice,‘ which is the truth. It’s still me though. I kept it dirty, gritty, and metal.”

This chapter saw him make a crucial personal decision too. Diagnosed with alopecia at three-years-old, he began to wear a wig at 14-years-old, dealing with “emotional and psychological damage from cruel bullying in school.” So, he wore the hairpiece throughout his career until finally deciding to go without it.  “In a way, it’s a blessing and a curse,” he admits. “I have nothing to prove, and I can wear a wig—or not. I am free to do what I want. I’m a grown man, and I’m getting to be an older man. Many men in this business eventually come to the decision to continue to ”wear hair” or shave their head which is very fashionable today. Either way, it takes a lot of personal courage. Assholes in high school trying to kick me around made me stronger and gave me the necessary motivation and strength to rise above the rest. Anger and pain are a great tool. If applied correctly, it could develop you to become the best version of yourself. Instead of running away, I was ”hiding in plain sight”.

In the end, Joe has something to say at the pit of Belly Of The Beast.  “Rock’n’Roll is about entertainment of course, but I hope you hear the message as well,” he leaves off. “It seems like everyone has sold their souls to major corporations. Once people are rich and popular, they become a part of the establishment. Where are the rebels? Who’s going to say, ‘Fuck you! We aren’t going to take this shit?’ I am.”