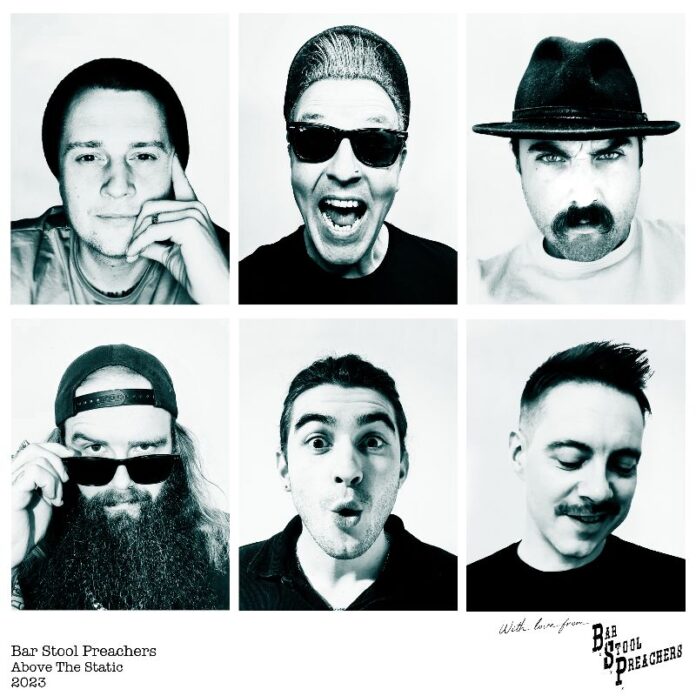 Brighton (UK) punks THE BAR STOOL PREACHERS have announced their brand new album ‘Above The Static’ which is out the 31st March via Pure Noise Records. Pre-order is available now – HERE. The band have also release the first single and video of the new album ‘All Turned Blue’. Stream – HERE.

Watch the video for ‘All Turned Blue’HERE

Speaking about the new single ‘All Turned Blue’ frontman Tom McFaull said ‘This is a song for lovers, a song for shared lives and a song that tells the truth about the grey area between hearts. All Turned Blue epitomises the ever present conflict that comes with falling in love and growing up. Catchy, relatable and heartfelt, it’s a story about making hard decisions, moving out and staying true to yourself – all set to a tune that will move your feet and stick in your head for days. As we walk through life, we pick up responsibilities and if we’re lucky, people, along the way. When we love those people, sometimes that love changes us.’

With help from some talented friends: Kevin Bivona (The Interrupters), Ted Hutt (Dropkick Murphy’s/Flogging Molly) and Ben Hannah (Nosebleed), the band are back bringing you their latest collection of chest-pumping, fist-raising, soul-saving songs, in their unique brand of party music. The album is called ‘Above the Static’ and whilst being a beautiful collection of raucous rock and roll, dancing ska and huge heartfelt punk anthems, it’s also a lifeline to anyone else who feels like they’re drowning in static in the modern age. Described as having the “perfect blend of intelligent punk anthems and poignant, unsentimental love songs, combined with the most infectious music you’ll hear this decade”, this album and these shows are long awaited, and not something you’re gonna want to miss. With pre-order starting January 2023, there’s never been a better chance to join the Bar Stool Preachers on their meteoric rise to becoming a household name.

The twelve songs that make up The Bar Stool Preachers‘ stunning third full-length, Above The Static, were only supposed to be ideas, a guide to what the actual album would and could later become. So in April 2021, together with producer Ben Hannah, the Brighton-based band set up camp at The Waterloo, a three-story pub/venue in the Northern seaside town of Blackpool, to begin the process that would lead to the process of making an album. But when they listened to ‘Flatlined’, the first song they committed to tape there, it dawned on them that it actually sounded like the finished product.

“We went in there with the idea of getting demos“says frontman Tom McFaull. “We took a recording desk and everything we could fit in the car with us because we wanted to mess around and dial in a sound. But as soon as we recorded that first song, Ben and I just looked at each other and went ‘This sounds massive enough to be the real thing.’ We were there for about two-and-a-half weeks in total. The pub was closed because of Covid, so it was just us and Fletch (the owner). We’d go to bed for a few hours, wake up, the first person up would put the coffee on and press play on whatever we’d recorded the night before. We just lived it fully. We couldn’t re-record this album if we tried.”

‘Above The Static’ truly does capture the moment which inspired it, as well as it capturing the complex, ever-evolving essence of the band that made it. Formed by McFaull and bassist Karl ‘Bungle’ Jeffery in 2014, these days The Bar Stool Preachers are completed by guitarists Tom Gibbs and Karl Smith, keyboardist Alex Hay, drummer Alex ‘Whibbs’ Whibley-Conway and most recently Ray Waters on guitars and many other instruments, all of whom are on a constant search to evolve, something equaled only by their desire to stay true to themselves. It’s that unique combination that’s at the heart of this record, one that sees the band riffing off their ska-punk roots, which also ensures they break the boundaries sonically of the punk genre. With this album, The Bar Stool Preachers want to both push through any preconceptions about the music they make, and ensure that what they do make doesn’t just fall on deaf ears.

The band will be doing a headline tour around the UK to celebrate the release of the album. Full dates below and tickets on sale now – HERE

Previous article
ON THE FRONT FOOT
Next article
SUN CITY