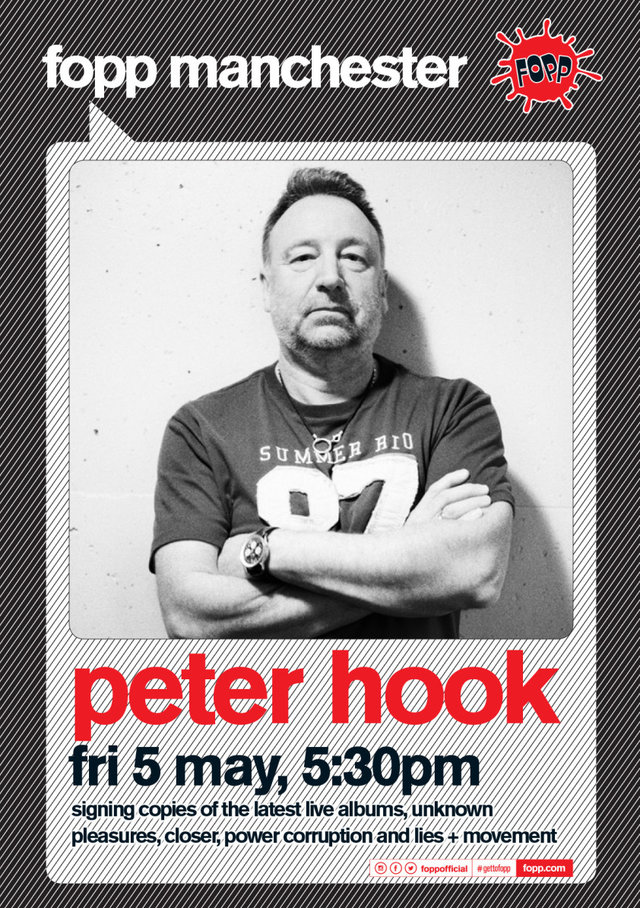 In this first public Manchester signing since the release of “Unknown Pleasures”, this Joy Division book in October 2012, Peter Hook comes to Fopp Manchester Friday 5th May from 530pm onward for an appearance to mark the release of four live albums by Peter Hook & The Light on vinyl, CD and digital.

Each title featuring the band performing a classic Joy Division or New Order album in its entirety with songs added that were not on those albums: singles, demos and other rarities. All four albums are to be first released as strictly limited edition colour deluxe vinyl versions for Record Store Day 2017 on 22nd April on the Let Them Eat Vinyl label.

This will then be followed by the CD and digital release of all four albums on 5th May 2017.  Both the vinyls and CD editions of the releases will be available at the Fopp signing which is currently Hooky’s only confirmed signing for these releases.

For full details and to order the releases check the Westworld Recordings site here – http://bit.ly/TheLightWestworldReleasesMay17InfoOrder

In addition, since Hooky did talks and events in Manchester surrounding last Autumn’s release of his third book, “Substance – Inside New Order” but no actual public signing, the event also marks an opportunity to pick up a signed copy of the much acclaimed work.

Having first revisiting Joy Division’s seminal album “Unknown Pleasures” back in May 2010 for a commemorative charity concert, Peter Hook & The Light have followed  it each year with performances of new albums from the repertoire of Hooky’s bands, New Order and Joy Division. The band have now moved through each of the albums from those bands to arrive at Factory Records “Substance” compilation albums which they are currently touring world-wide.
Hooky’s dedication to his back catalogue has seen him move  through “Closer”, “Still”, “Movement”, “Power Corruption & Lies”, “Low Life” and “Brotherhood” to arrive at the seminal compilations and having toured extensively with the band, The Light have come to amass some 450 plus shows in the seven years since their first concert
PETER HOOK AND THE LIGHT premiere more tracks worldwide from the upcoming quartet of special live shows released soon on Westworld Recordings.
Vive Le Rock showcased “Shadowplay” from the ‘Unknown Pleasures’ set recorded in Leeds. Check it out here: