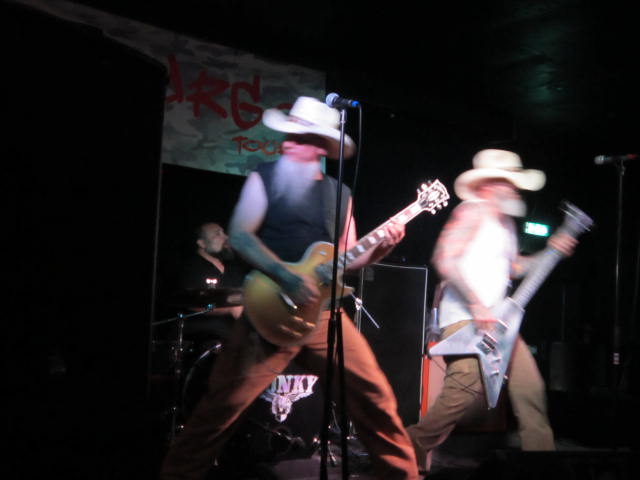 Local boys A Tower Of Crows have been busily building up a reputation as the West Midlands’ finest answer to Down over the last year or so, and show just why here. “Lay Down Low” hits all the right places, with Sam Clay giving his usual impassioned vocal performance. The even better – and crushingly heavy – “Triumph Of War” even moves tonight’s headliners to be visibly impressed and well it might.

Charles Dexter Ward And The Imagineers are late replacements on the bill and the quartet are something of a mystery. Here’s what we know. They play a wonderful blend of heavy blues and psychedelia, which they describe as a “phantasmagorical adventure through time and riffs”. That’ll do. They’ve got an album called “Love, Death and Time Travel” which frankly, you need in your collection if you have any love for riff rock n roll whatsoever. The music here does the talking, and it speaks very eloquently indeed.

Matt Ryan has a problem. Desert Storm’s gravel-throated king has had to switch to water. Not, you understand, through choice. “yeah, I spewed up about ten minutes before we came on” he offers. Rock and indeed roll. Lesser men wouldn’t be in any shape for half an hour of concrete block heavy music. Desert Storm, though, simply crack on like the wonderful band they are. “Queen Reefer” from their most recent “Omniscient” outing sounds especially monstrous here, and their closing song “Enslaved In The Icy Tundra” is as good now as its always been. However, it is what happens in-between that is the most interesting, a brand new track called “Convulsion” which might just be the nastiest song they’ve ever written.

Honky, the (second) best little old band from Texas, celebrated their twentieth anniversary by releasing a quite brilliant record in “Corduroy” which emerged a month or so back. Now JD Pinkus, Bobby Ed Landgraf (and their stunning matching Team Honky cowboy hats), have brought their unique brand of party to the UK. The optimum word here is party too, because good Lord, you hope they weren’t driving the tour bus given the amount of Jim Beam that was consumed during a breakneck 80-minute trawl through as many songs as they could fit in (or possibly remember).

The title track of the new record – and the boys are clad in their corduroy’s to celebrate – kicks things off and its noticeable that things are much rawer here than on record, “Outta Season” is transformed for example, and instead of sounding like ZZ Top “Snortin’ Whiskey” is infused with an almost Monster Magnet like stomping intent.

This isn’t, though, solely confined to new material, and as the Jim Beam flows so do the tunes from those two decades, “Baby Don’t Slow Down” revs up, “Love To Smoke Your Weed” is about as self-explanatory as it gets, “WFO” is catchy as you like and there’s a trip back to the first song on the first album for the marvellously titled “Smoking Weed With Hellios Creed” before things are done.

If warts and all boogie rock n roll is your thing then Honky deliver. Or put it like this, Billy Gibbons and the boys are the Sharp Dressed Men, then Honky most probably are the drunks out the front begging for change, but, yeah, they are having a good time now, as another band might have said.