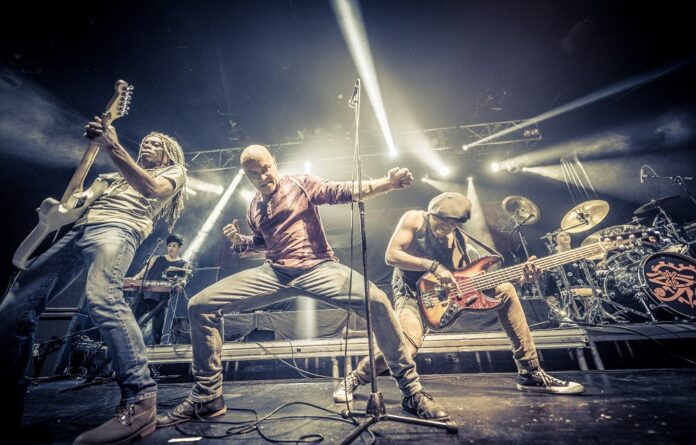 Dan Reed Network are pleased to announce the Friday 27th May release of Homegrown – the third single taken from their highlight anticipated sixth studio album Let’s Hear It For The King. The new album will be released by Drakkar Entertainment on Friday 17 June 2022.

The new single is available to stream from https://bfan.link/homegrown. The album is available to pre-order from www.danreednetwork.tmstor.es. The official music video for Homegrown can be viewed on YouTube via www.youtube.com/watch?v=02wPPexKMNI.

On the new album Let’s Hear If For The King, Dan Reed Network return with a collection of their distinctive brand of exhilarating rock, funk, and soul.  The highly anticipated sixth studio album is DRN’s first since 2018’s Origins album.

Let’s Hear It For The King comes full circle to the band’s original vision statement – to challenge beliefs, smash down existing protocol, and build something new out of the shrapnel.

Not for the faint-hearted, the long-awaited new DRN album pays tremendous detail to infectious melodies, provocative lyrics and honours their shredding funk rock roots. The new album is targeted at visionaries who want to be part of, and bear witness, to the next step in the Dan Reed Network’s artistic evolution.

Available to pre-order from the Dan Reed Network store www.danreednetwork.tmstor.es. Let’s Hear It From The King will be available as a limited edition DRN LHIFTK box set, limited edition coloured vinyl, and much more. Dan has even created personalised, hand-written lyric sheets for each song that will be randomly placed inside the limited-edition box sets. Happy hunting, everyone!

“The new album snarls and bites,” says an enthusiastic Dan Reed. “We wanted to cut our teeth alongside some young, high-energy bands, so who better than Reckless Love and Collateral. Those boys can rock. Anyone who’s seen DRN live knows that’s where we come to life.  We’re ready to deliver a lot of energy and give the audience a direct shot of funk n’ roll!”

Tickets for all Dan Reed Network concerts are available at www.danreed-network.com/tour.

*Bonus track on CD (not available on vinyl edition)