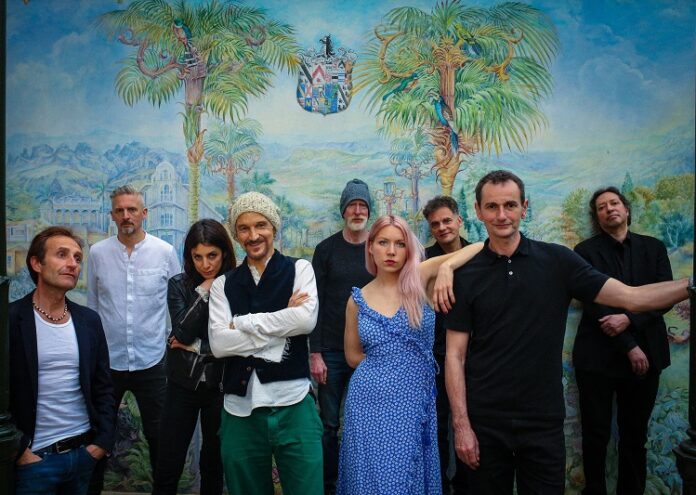 JAMES are pleased to announce the release of THE CAMPFIRE EP on 19 November. Filmed and recorded at Broughton Hall in the Yorkshire Dales earlier this year, the EP features uniquely intimate versions of three tracks from the band’s latest album, ALL THE COLOURS OF YOU, with the additional bonus of their classic Just Like Fred Astaire, taken from their 1999 album Millionaires.

THE CAMPFIRE EP will be available exclusively on the JAMES store and at merchandise desks on their forthcoming arena tour. The EP is a limited-edition release, individually numbered and includes a QR code to download THE CAMPFIRE videos.

Singer Tim Booth says: “The beginning of the new James 9 piece began at Broughton Hall. The sessions there felt magical. Here is a slice of the magic that we created around a campfire one evening …”

JAMES will perform tracks from All the Colours of You and many more from their rich catalogue on the forthcoming arena tour with special guests HAPPY MONDAYS.

Recorded in part before the Covid pandemic struck, All the Colours of You was produced by the Grammy award winning Jacknife Lee (U2, REM, Taylor Swift, Snow Patrol, The Killers). On production duties with James for the first time, he brought a fresh approach to their sound, working remotely from his studio liaising with Tim Booth (his Topanga Canyon neighbour) and Jim Glennie from the band, reimagining their demos and capturing the band in all their virtual glory. The result is a record with the freshest and most arena-ready tracks of their 39-year career; the sound of one of Britain’s best bands deconstructed and reassembled by one of the world’s most renowned producers.

Since the release of Sit Down, their breakthrough single in 1991, James have released 16 studio albums, selling over 25 million copies in the process, and performed at countless headline shows and festivals across the world. They continue to be a huge live draw, having sold 60,000 tickets for their UK arena tour in November and December this year, a tour which has sold faster than any previous James tour.