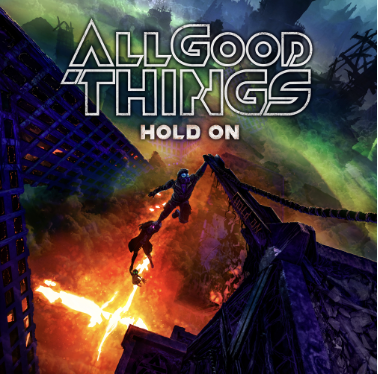 Today, All Good Things released their new EP Hold On via Better Noise Music, a year after their debut album A Hope In Hell was released. The band broke barriers last year, earning over 81.3M streams in the last 12 months, their first rock radio #1 with “For The Glory,” a song that has been featured in major tentpole cultural moments like last year’s Stanley Cup Finals, ABC News’ broadcast promo for the 2021 State of the Union and Fox’s “So You Think You Can Dance.” The EP includes two new versions of their fan-favorite track, “Hold On,” a collaboration with Lacey Sturm and an acoustic version, the latter of which is also receiving its official music video premiere today. A lyric video for “Hold On (ft. Lacey Sturm)” also premiered today. Catch the band on tour with Theory of a Deadman this fall, visit HERE for tickets. Stream Hold OnHERE – see the full track listing below. Watch the official music video for “Hold On (Acoustic)” HERE.

All Good Things bass player Liz Hooper shared, “The Hold On EP is a long-awaited collection of songs that seem to perfectly capture the emotions the world is feeling right now. The EP features a powerful collab with the legendary Lacey Sturm on “Hold On,” a heartfelt acoustic orchestral version, a  B-side “Relentless” which is a deep cut AGT army favorite, and an epic rock rendition of Destiny’s Child’s “Survivor.”

Lead singer Dan Murphy says “We wrote and recorded these songs at a time when we all were feeling frustrated, wondering if our album would ever come out and worried about what crazy thing was going to happen next! These songs became an anthem to ourselves to keep fighting and “hold on,” even as the world was coming to a standstill with the pandemic. Years later we’re so moved to discover that these songs have become our fans’ anthems of survival too, especially through the many challenges of the last few years.”

The intimate official music video for “Hold On (Acoustic)” features the band performing the song in the studio. The video was directed by the band and is available to stream.

All Good Things is partnering with To Write Love On Her Arms to create honest and hopeful conversations during the month of September, Suicide Prevention Month. TWLOHA is working to disrupt the belief that struggling with mental health makes you a burden by exploring what it looks like to support people through their darkest moments, learning how to have the conversations and connect people to resources, and investing in the tools and resources that make healing possible. Their goal is to raise $250,000 which will make it possible to sponsor 3,600 counseling and group therapy sessions, and support 45,000 people in finding local mental health resources. Visit youarenotaburden.com for more information. Use the campaign hashtag #NotABurden and #SuicidePreventionMonth to help All Good Things and To Write Love On Her Arms raise awareness this September.

All Good Things are on tour with Theory of a Deadman this fall. Fans can catch them performing at the Louder Than Life Festival tonight and on tour in Missoula, Billings, Salt Lake City, Boise, and other cities. See below for a full list of dates. Purchase tickets HERE.

The band released a new version of their anthemic hit “For The Glory,” now featuring Johnny 3 Tears and Charlie Scene of Hollywood Undead, which appears on the soundtrack for The Retaliators, a Better Noise film.  Reaching over 100M streams, the original track has resonated with millions of listeners around the world as an unapologetic victory song for the underdog. Watch the video, directed by Wombat Fire HERE.