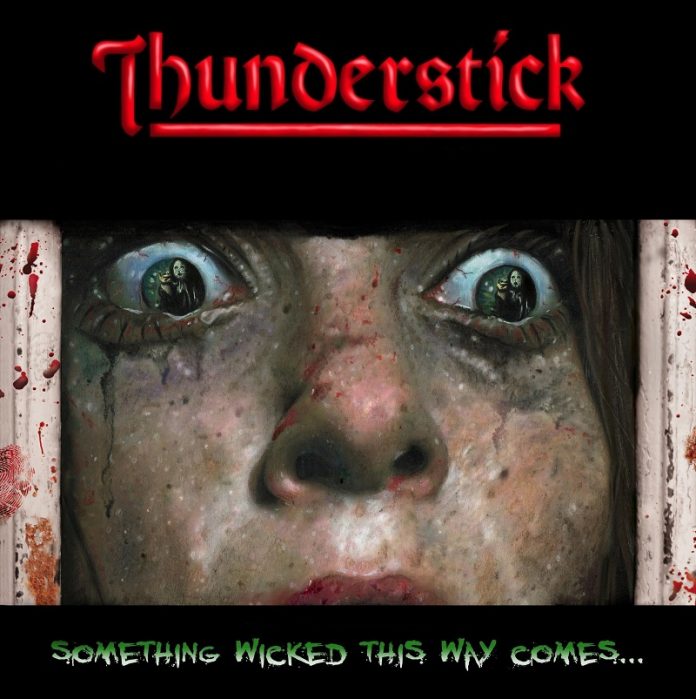 First noticed playing with a developing Iron Maiden in the seventies then moving to Samson (being instrumental in finding a very youthful Bruce Dickinson) Barry Graham Purkis became the figurehead of the newly emerging NWOBHM (New Wave Of British Heavy Metal) scene.

This was done by creating an alter ego Thunderstick, a masked persona known not only for his wild style of playing his drums but doing so from inside a cage and terrorizing audiences. He went on to form his own highly theatrical band in the eighties. Fronted by a female rock ‘n’ roll wildchild Thunderstick the band was a perfect ‘Beauty and the Beast’ combination, playing live and recording for five years until it folded in 1987.

Never to be seen again until now……

Thunderstick is back with a brand new studio album which remains true to the band’s original ‘classic rock’ style: ‘Something Wicked This Way Comes’

Thunderstick: “This is an album that is befitting of the Thunderstick of another era, but screams relevance for today.”

“The whole thing came about because of the tragic death of our former vocalist Jodee Valentine at just 55. Jodee’s passing hit me really hard and I wanted to do something in her memory. There are some songs that we were playing live first time around that had never been released, coupled with some new tracks that have been written purely for this album. A new line up. A new album. A new era.”

Scheduled for release 31 July 2017 this is the classic Thunderstick band format of female vocalist, two guitars, bass and drums and the first Thunderstick album of new material in over three decades.

The CD album will be available for purchase via Thunderstick’s Facebook page, via https://www.freewebstore.org/thunderstick-productions and via Bandcamp https://thunderstick.bandcamp.com/album/something-wicked-this-way-comes

Downloads can be made available on request.

Song titles on ‘Something Wicked This Way Comes’ are as follows: