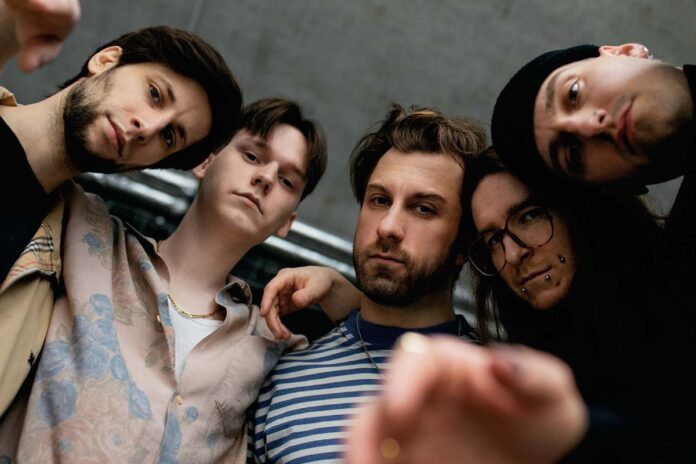 Modern metal quintet The Oklahoma Kid have released a video for their brand new single ‘Waldsterben’, taken from their new album, Tangerine Tragic, out now via Arising Empire.

‘Waldsterben’ is filled with ruthless aggression in the wake of an undeniable truth.

Known for their unique blend of genres, the avant-garde five-piece continue to push boundaries and break old conventions. ‘Waldsterben’ follows previous singles ‘Dye Black to Pink‘, ‘A Velvet Feel‘, ‘Come Undone‘, ‘Melt Into You‘, and ‘Pale Tongue‘. Each track is a disturbing trip with psychedelic visuals and heavy rhythms, deeply influenced by early millennial industrial music and Neue Deutsche Härte, with melodic heaviness bursting at the seams.

Following the success of debut album Solarray (2019) The Oklahoma Kid set their focus on writing new music with one simple goal in mind, to better themselves and create something that fans will truly crave, resulting in new album Tangerine Tragic. Built on the strengths of Solarra, Tangerine Tragic experiments with new ideas and concepts that are as gentle as a breeze and also strike hard as a wrecking ball. The album was recorded and produced by Jan Kerscher (Ghost City Recordings), and mixed and mastered by Lance Prenc (Alpha Wolf, Polaris, Dealer), giving the production its full blown punch.

“We are always trying to get different influences into our music, that’s why we were looking for a producer outside our genre, to get some new input. When we first met up with Jan, we knew he was a perfect match to record and produce our new material.”

Formed in 2012, The Oklahoma Kid have consistently pushed boundaries with their breathtaking modern metal, bridging the gap between technical intricacy and energising rhythms. The band’s 2014 debut EP Fortuneteller established their position within the German metal scene with their signature blend of genres.

In 2015 they revealed their sophomore EP Doppelganger, working with renowned producer Aljoscha Sieg (Eskimo Callboy, We Butter The Bread With Butter, Nasty) to deliver their signature bouncing grooves and futuristic synthesisers, complete with catchy hooks and singalongs. The band’s unique video for ‘Scharlatan’, which was directed by Pavel Trebukhin (Alazka, Stick To Your Guns, Annisokay), also won the national PopFish Music Video Award.

2017 saw The Oklahoma Kid enter the studio to work on their debut album Solarray, a release that displayed the band’s full sonic scope and capabilities – ranging from huge wall-of-sound arrangements to fragile melodies.

The Oklahoma Kid have electrified crowds with their passionate, relentless performance, touring with Stick To Your Guns, Carnifex, Evergreen Terrace and Hatebreed.

The quintet are no long an insider tip, they are a force to be reckoned with. Whether you experience them live at a festival or on record in your living room, The Oklahoma Kid will change your perception of what metal is capable of.