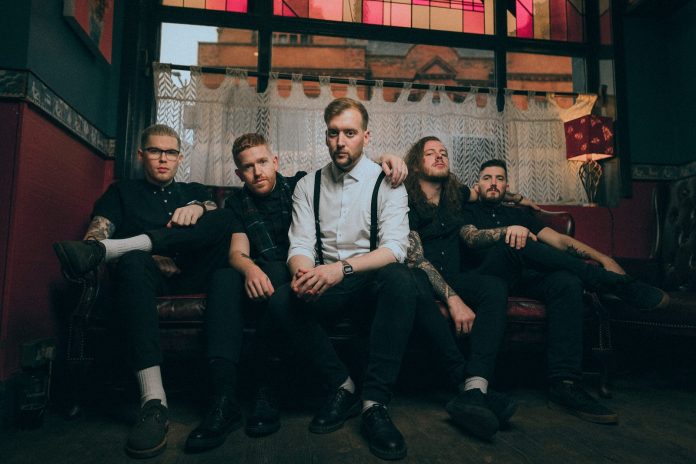 HELL’S DITCH are pleased to unveil their debut single ‘Vacant Hearts’ streaming today through all good digital service providers. The track will be released as a double-A sided 7″ vinyl through 16th March 2020 through Disconnect Disconnect (UK), Rose Coloured Records (UK) & Bypolar Records and is available to pre-order now from the band’s official site: hellsditch.co.uk.

Earning their stripes in the underground touring circuit, the members of Hell’s Ditch met while touring in previous bands well known in the UK and European punk scene including River Jumpers, Bad Ideas, Dearist, Maycomb, Chief and Knock Out Kaine. Acts which shared stages with the likes of Anti-Flag, H2O, Reel Big Fish, Mad Caddies and The Swellers as well as appearing at the prestigious Download, Groezrock and Rebellion festivals during their tenures. After these acts dissolved the group joined forces to begin crafting a set of songs with the intention of making it their most ambitious work to date.

Born and raised in the cities of Liverpool, Lincoln and Wolverhampton, Hell’s Ditch are a British rock ‘n’ roll group with total heart and determination compounded by DIY punk ethics and a hardy knack for storytelling. Using their 3-minute riff-driven punk songs as their modus operandi, the band breathe to life tales of working-class fates, inner-city poverty, alienation, violence, oppression and unflinching resistance. All told through the lens of brutal, ragged, but often loveable characters.

Vocalist Nik Davis states, “I’m obsessed with these songs and this band. We push each other to write better music, create original ideas and wake up each day excited for what’s to come. It’s going to be so much fun to play shows again with this group of musicians”.

Their musical influences may be rooted deep in the melodic punk and hardcore scene’s which the members grew up inside, but with this new project they aim to broaden their horizons committing themselves to a bold and narrative driven style of songwriting.

Guitarist Lee Byrne adds, “Our intention was to create something beyond just a set of punk songs. We love songwriters like Shane MacGowan and Bruce Springsteen and want to draw people into a whole world of characters, with stories that mirror their own lives and that of generations gone by”.

Sharing their new single ‘Vacant Hearts’ today, Hell’s Ditch will take to the road with a series of UK shows early this year beginning with a series of dates alongside Merseyside punk legends, Down and Outs and Midlands Indie-punk outfit Lovebreakers. The group have also been announced as an addition to Manchester Punk Festival with the likes of The Flatliners and Off With Their Heads and also to Lincolnshire’s premier rock weekender Call of the Wild Festival.

31st May – Call of the Wild Festival