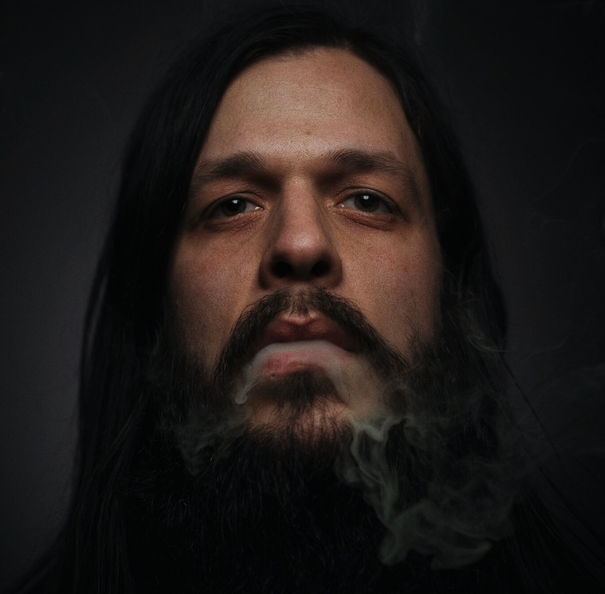 May 11, 2016 (Fayetteville, AR) – New Noise Magazine will premiere the new Shawn James video “Hellhound” at 12 noon today HERE. The track is the first single from the upcoming solo release, On The Shoulders of Giants, which streets June 17, 2016 and is available as pre-sale HERE.

“My father was known as the Wolfman back in the day,” James explains, “and on “Hellhound,” I deal with the fact that I notice good and bad tendencies that he had coming out in me ‘when the moon is full’. “Hellhound” employs mythical lyrics exploring that.”

The video of Shawn James performing an impromptu acoustic version of the A.A. Bondy song “American Hearts” at the W.O.L.F. Sanctuary in Colorado went viral (currently 3.3 million views and counting). Read the story about it in Acoustic Guitar Magazine HERE.

Shawn James is currently on tour with his swamp metal, Rock & Roar band, the Shapeshifters. The band delivers a dynamic live set blending swampy blues and heavy metal. The band is Shawn James on guitar and vocals, Baker McKinney on banjo, Jeff Bodine on bass and Kirby Westmoreland on drums.
SHAWN JAMES AND THE SHAPESHIFTERS Tour Itinerary:
Wednesday, May 11th at Club Cigar in Great Falls, MT
Thursday, May 12th at Zebra Cocktail Lounge in Bozeman, MT
Friday, May 13th at Stage 112 in Missoula, MT
Saturday, May 14th at The Cobalt in Vancouver, Canada with Supersuckers
Sunday, May 15th at El Corazon Lounge in Seattle, WA
Monday, May 16th at Dante’s in Portland, OR
Tuesday, May 17th at Old Nick’s in Eugene, OR
Wednesday, May 18th at Astro Lounge in Bend, OR
Thursday, May 19th at The Dip in Redding, CA
Friday, May 20th at Sassafras in Carson City, NV
Saturday, May 21st at Thee Parkside in San Francisco, CA
Sunday, May 22nd at Dive Bar in Las Vegas, NV
Tuesday, May 24th at Green Room in Flagstaff, AZ
Wednesday, May 25th at Yucca Tap Room in Tempe, AZ
Friday, May 27th at Barleycorn’s in Wichita, KS
Saturday, May 28th at Westport Roots Festival in Kansas City, MO
Thursday, June 2nd at Duffy’s Tavern in Lincoln, NE
Friday, June 3rd at J-Rods in Kearney, NE
Saturday, June 4th at Choice City Stomp Fest in Ft. Collins
Sunday, June 5th at Stage Stop in Rollins, CO
Tuesday, June 7th at Lefty’s in Des Moines, IA
Wednesday, June 8th at Reggie’s in Chicago, IL
Thursday, June 9th at 5th Quarter in Indianapolis, IN
Friday, June 10th at Brass Rail in Ft. Wayne, IN
Saturday, June 11th TBA
Thursday, June 16 at Majestic Cafe in Detroit, MI with In The Whale
Friday, June 17th at Wille’s Local in Lexington, KY
Friday, August 16th at Leftwoods in Amarillo, TX
Saturday, October 29th at The Fest in Gainesville, FL
Shawn James can be found online at:
shawnjamesmusic.com
facebook.com/ShawnJamesSoul
twitter.com/ShawnJamesMusic
youtube.com/ShawnJamesSoul
ShawnJamesSoul.bandcamp.com