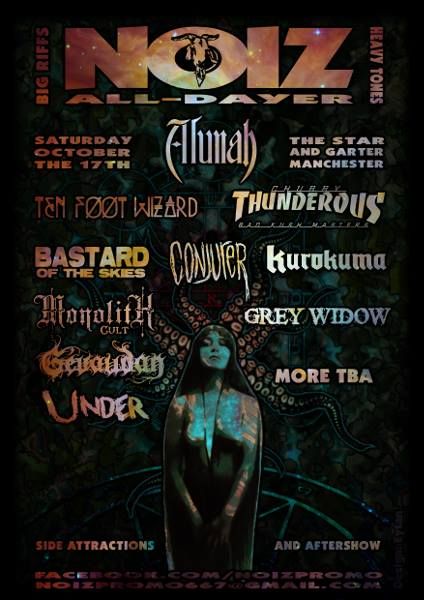 ….And they are friends of MVM. Plus the mighty Conjurer are on the bill!

NOIZ Promotions is hosting a day of BIG RIFFS AND HEAVY TONES at the Star & Garter, Manchester, on Saturday 17 October. Event here:https://www.facebook.com/events/1479544972270465/
The NOIZ All-Dayer will be headlined by enchanting, classic doomers Alunah, which forms the Manchester date of their Octdoom Tour.
The lineup is now almost full with Ten Foot Wizard, Chubby Thunderous Bad Kush Masters, Bastard of the Skies, Conjurer, Kurokuma, Monolith Cult, Grey Widow, Gévaudan and Under joining Alunah.
NOIZ Promotions commented: “Over the last few years, the city of Manchester has become one of the most respected and active in the UK riff scene and has drawn interest and fans to here, resulting in an expanding, yet tight-knit scene. I’m really excited to have such a great lineup – so, BIG RIFFS AND HEAVY TONES will be the order of the day.”
The event will also feature side attractions and an aftershow, details of which are all yet to be announced, together with the final wave of band announcements in the coming weeks.