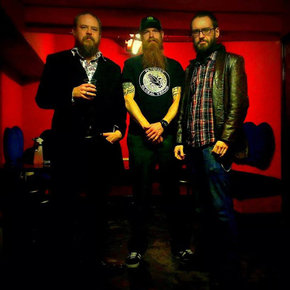 Frequently described as ‘psychedelic doom’, swirling phasers and repetitive pounding rhythms give way to downtuned heaviness in a way that is somehow both tight and loose at the same time.

Headless Kross recorded their latest album ‘Volumes’ in July 2014 with Chris Fielding at Skyhammer Studio. This is due for release in early 2015 on Black Bow (vinyl and cassette) and Burning World (CD and download), with an amazing painted cover by US artist W. Ralph Walters. The album contains 3 gargantuan songs exploring the well-worn theme of nature reasserting herself in an incredibly violent way.

‘Volumes’ is released on vinyl via Black Bow Records on April 1st 2015, while the compact disc pressing will be handled by Burning World Records