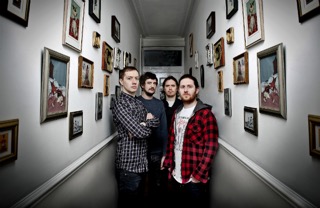 And their tour starts on Thursday

Hawk Eyes Vocalist/guitarist Paul Astick’s Great-Grandfather was master of the SS Marlay – a coal steamer that ran between Liverpool and Dublin. In 1902 the ship sadly sank in a heavy storm and 15 crew, including master Hamilton, drowned. The only survivor was a man called Michael McGlue. He was the only one to make the lifeboat and the band’s new single ‘The Ballad of Michael McGlue’ is from his perspective.

Premiered on the BBC Radio 1 Rock Show and being crowned Single of The Week on the Team Rock Radio Breakfast show already, ‘The Ballad of Michael McGlue’ now has an accompanying music video which can be viewed here

It’s the second single from the forthcoming album ‘Everything Is Fine’ which is released on February 16th. The band also kick off a full UK headline tour on February 12th.

It’s been a career punctuated with critical acclaim, radio support and the hugest of shows for Hawk Eyes to this point and ‘Everything Is Fine’ looks set to take them to an even higher level. With new drummer John Mackenzie revitalizing the band and renewing their passion for being on the road (which never really left them, let’s be honest), it’s certain that Hawk Eyes will continue to traverse the globe bringing their unique and vital brand of rock music to the masses.