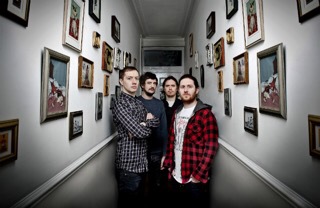 Having recently released the first music video to illustrate a track on their forthcoming album ‘Everything Is Fine’ with ‘Die Trying’, Leeds-based Hawk Eyes have unveiled another track from the record in the form of ‘Enemies’. Vocalist/guitarist Paul Astick explains “It’s a lyrical/sentimental hangover from IDEAS, kind of a ‘Witch Hunt’ Part 2. People are idiots. Don’t listen to them.”

‘Everything Is Fine’ is set for release on 9th Feb, 2015. Writing for the record begun back in 2012 with spurts of creativity between tours and shows, both humungous and small. Producer Andy Hawkins took the reins throughout the recording process with additional engineering from Ryan of the band and their live sound engineer Giles Stocks.

Hawk Eyes will continue to traverse the globe bringing their unique and vital brand of rock music to the masses, starting with their very own headline tour of the UK in February.

New album ‘Everything Is Fine’ set for release on 9th Feb, 2015 via Red Vole.

Previous article
Deconstructing Sequence Have The Access Code
Next article
Visigoth To Be Metal’s New Kings?