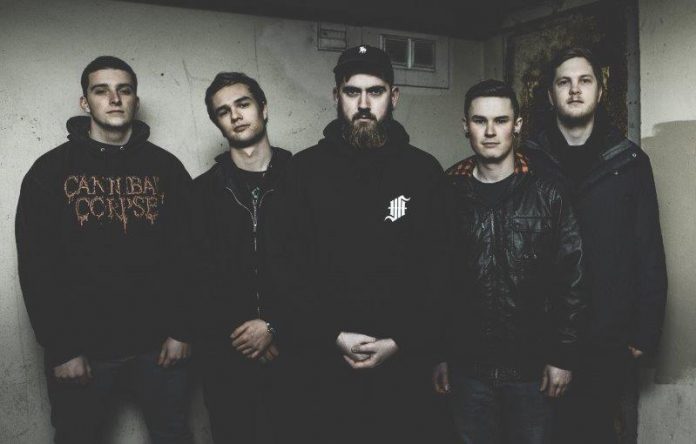 London’s Harbinger are a ferocious five piece who are about to set a new precedent for musical extremity with their debut EP Paroxysm, and today announce its release date of 3 June.

To celebrate they are streaming a brand new track from the EP, check out ‘A Fractured World’ here:

Since forming in 2015, Harbinger have already established a very clear direction with their own brand of modern melodic death metal that boasts not only phenomenal technical prowess, but also huge hooks that make their tunes as memorable as they are brutal.

Featuring ex members of Acrania, Doomed From Day One and No Rest, it’s no surprise that Harbinger have quickly produced work of this quality. From the opening track to the last second of Paroxysm, each riff is meticulously thought out, every melody has purpose and every rhythm has its space. The band seamlessly flow from super-speed deathly chops to crushing beatdowns which, when combined with tasteful harmonies, gracious arpeggios and jaw dropping shred, puts them in another league to most of their contemporaries.

Frontman Tom Gardner provides the final and essential part of the Harbinger sound. From guttural roars to melodic screams, Tom’s huge range and impressive diversity adds chilling colour and depth, but also an appeal to fans of death, black, tech and beyond.

Lyrically the band dissect social, global and political issues, and have a lot to say about the state of the world we live in. The debut track ‘A Fractured World’ focuses on oppression through racism and sexism; even though the world is becoming more accepting of difference, we’re still fighting a huge battle for equality.

Bassist Kris Aarre comments: “We have been working on this record for a long time now, and we are so excited to release it! We feel like we’ve found a unique, distinctive sound by fusing technical death metal, catchy choruses and slam laden beatdown music to give people something to move with and sing along to. A Fractured World is a glimpse into the heavier side of the record, and the track really promotes the slam elements and technicality of our music. It’s definitely a headbanger.”

Harbinger launched onto the live circuit in 2015 supporting Monuments and already have 2016 dates in the diary with Belial, Slaughter to Prevail, as well as slot at UK Tech Fest with Protest the Hero, Between The Buried and Me and many more.