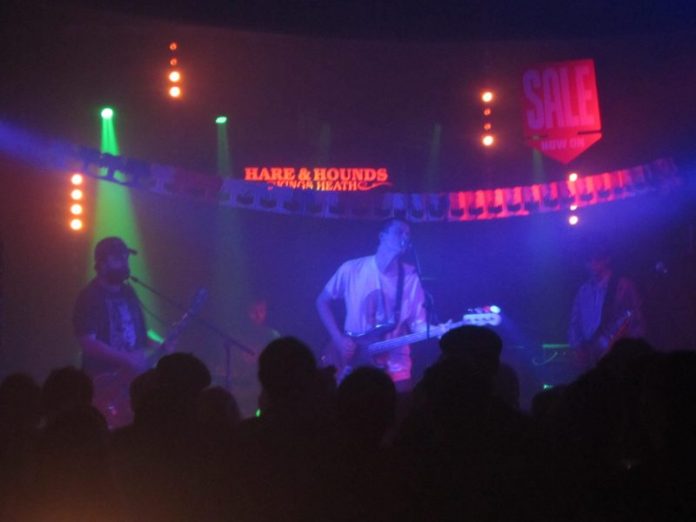 Our Damian has never knowingly been happy – until now

A fairly full room awaits the arrival of Her`s, a Liverpool based pop duo consisting of Stephen Fitzpatrick and Audun Laading. Stephen hailing from Barrow in Furness and Audun from Norway met in Liverpool as students. The boys are best described as a Dream / Jangle Pop outfit and share some peculiar, quite ironic lyrics over some quirky guitar and bass chords, aided by a trusty drum / tape machine. We were rewarded with some really interesting and enjoyable tunes during this short set of which “I’ll Try” and “Speed Racer” were the stand outs for me. The debut album is out next month so a band worth keeping an eye on.

A short break and Happyness saunter on stage to some rapturous applause. Tonight’s set is pretty evenly divided between songs from the band’s debut album “Weird Little Birthday” and recent release ”Write In` The show opens with the wonderful `Anna, Lisa Calls` with it’s great hooks and harmonies, very reminiscent of the American West Coast sound. Two numbers from the debut ` Anything I Do Is All Right` and `It’s On You` are shared before guitarist Benji sits down at the piano to play `Through Windows` where the vocals are talked and sung above the guitar and piano keys.

The guitar led ` Naked Patients` is up next before ` Bigger Glass Less Full` is blasted out, a cracker of a song with some fine vocals and a terrific guitar jam. The dreamlike piano driven “The Reel Start Again (Man As Ostrich)” is played out and then the more laid back “The C Is A BAG”

Jon introduces us to Ash Cooper the drummer and additional musician Paul on guitar, who happens to be a Parisian and confirms this by rattling off something in French!! “Lofts” is a more edgy tune and is closely followed by the laid back “You Come To Kill Me? “

The set is closed out with “SB`s Truck”, “Montreal Rock Band Somewhere” and a song that Jon says that they spent the least time on but everyone seems to like it the most “Tunnel Vision On Your Part”

The farcical situation of leaving the stage and returning for an encore was avoided and we were all left really elated after witnessing and enjoying over an hours worth of intelligent lyrics played over some wonderful tunes.

I thought the band played a similar sound to bands like The Byrds, the Beach Boys and the sadly missed Irish troupe the Thrills but this was, nevertheless, all their own style.

I was fortunate to get to review their latest release and wasn’t sure if they could pull it off it a live setting but they managed to surpass my expectations. If you want a night out to lift your spirits, I can certainly recommend you spend a night with Happyness.