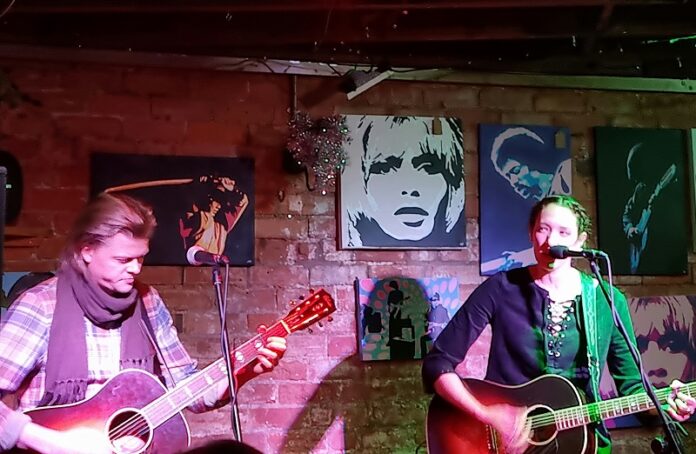 December 9th is Hannah Aldridge’s birthday. Whatever happened in 2021, I guess, would be better than the one she “celebrated” last year. Quarantined at home in Nashville, with her son Jackson and Schnauzer, Ozzy (appropriate name for a Birmingham show) and as she puts it: “not knowing whether I’d ever play live again.”

And that’s a feeling that permeates the gig tonight. Goodness, its why she’s here, in Birmingham, in the mist, the cold and with drizzle twinkling in the Christmas lights that adorn the Garden part of the Kitchen Garden Café giving an oddly gothic backdrop.

A quick backstory. She and Jetbone’s Gustav Sjödin (a band she’s often toured with and the avuncular Swede is providing a second guitar and harmonies on the dates) were supposed to be in Scotland tonight, but Covid rules intervened and after two years of no interaction, Aldridge wasn’t having another night off, so this was hastily arranged and given her history at the venue (where she’s played many times over the years) there’s a real feeling of being amongst friends here.

That’s reflected too, in a set that is different, perhaps to her usual one, a little more relaxed and informal – but my, one thing hasn’t changed. Hannah Aldridge is a brilliant singer, with brilliant songs and an incredible way of conveying her stories to people.

Beginning with the title track of her debut album, “Razor Wire”, perhaps underlines that she’s read the room so well tonight. It’s not so much that these are the type of fans that are going to demand “play the old stuff”, more that they are the type of people who live for these type of shows. That she follows it with the superb “Old Ghosts”, from the same record is indicative too, that she’s enjoying the freedom.

That one is a “proper” country tune as it were, and it seems like Hannah Aldridge, given her family history (look up her dad) has been trying to shake the country tag ever since. The truth is that she’s not a country singer. Country singers don’t have songs about demon possession and sex. She does “Lace” does, and there’s still a twinkle in her eye every time she does the line about “I can be your new favourite sin,” whatever she claims.

There’s a new single “Some Ghosts (Don’t Make A Sound)” which she wrote with Jason Charles Miller, once of the band gODHEAD (and I don’t think I am too far out on a limb here to suggest that I  might be the only one in the crowd who saw them open for Marilyn Manson in 2001) and the murder ballad thing suits her. Even if this is written about her own grandad (“my mother doesn’t agree” she rather euphemistically puts it).

Full disclosure: I became a fan of Hannah’s when she released her second record. And it’s still a thrill to hear songs like “Aftermath” from it – especially given its new arrangement here. That’s the vibe really. There’s new songs, “Unbeliver” takes on the last two years and tries to make sense of it, there’s songs she loves “Yankee Bank” (written by her dad) and audience requests – and whoever asked for the lust filled “Lie Like You Love Me” was bang on.

Split into two halves the second set follows the same pattern. Courtney Marie Andrews’ (who played just across the road a few weeks ago) “Near You” is played, because, well why not? And so are early songs “Lonesome” and “Howlin’ Bones”. The former is preceded with a story that explains why it was the song that started it all, and when you listen to her talk, you sense the passion that still drives Aldridge.

Of course, you don’t get to travel the world with your songs unless you have it, and it helps that she’s very evidently still a fan too. “Sinking” by the aforementioned gODHEAD doesn’t get played otherwise. And then, there’s the thought that unless your songs connect then no one comes out to see you anyway.

Aldridge’s do. “No Heart Left Behind” stripped of its bombast here, proves my belief that a great song can be played in any way, and the title track of “Gold Rush” – that second record – is a personal favourite. So fragile, yet so determined, it is one of my favourite songs of the last decade.

There was only one way this was going to end, though and that’s with “Burning Down Birmingham”. Written after another birthday gig. A disastrous one in Birmingham, Alabama. She’s told the story before about some guy threw up on her outside the show and she was left thinking about her life choices.

I guess that’s what happens with birthdays – and I haven’t celebrated one of mine in 25 years. If its any consolation though (not withstanding the fact that she was heading to the pub after where Gustav was ready to drink Guinness, so who knows what happened…) Hannah Aldridge got it absolutely spot on when she came here tonight.