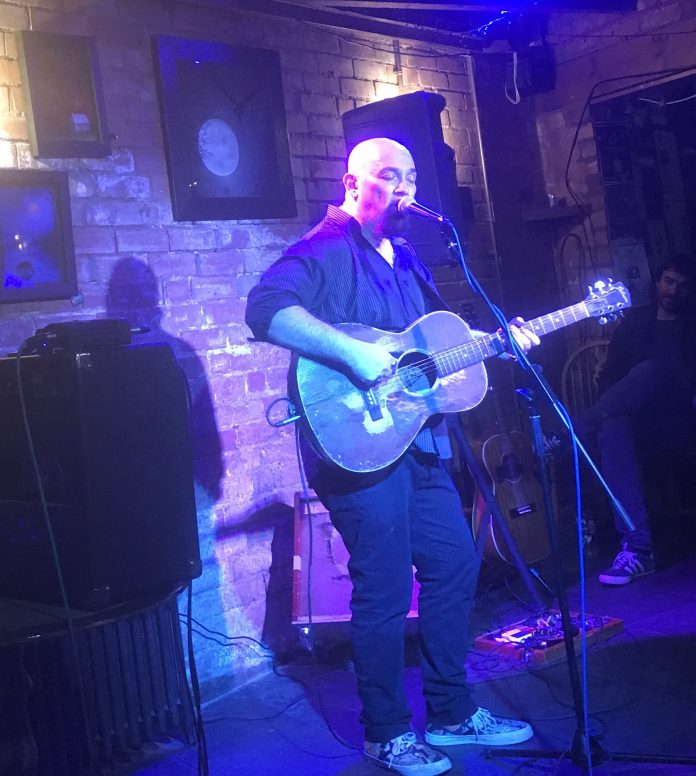 I’ve always been drawn to the singer songwriter who means it. Who pours themselves into the song, and who you feel like you know after their hour onstage. Hands up, confession time, I’d never heard of Ruth Theodore before this evening, but a more honest performer you will not find. A former resident on squatted land in Hackney, she now lives in The Hampshire countryside and those are the things that inform her songs. “Hunters And Gatherers” is particularly personal, and at once impressive. Elsewhere she writes songs in a way that other people wouldn’t. “Eris” for example, is about having a crush on someone written through the prism of Space, “Loop Hole” is directly about the squatters life, while the even better “Everything Is Temporary” works on many levels. Perhaps the best of all though, is the one she plays right at the end, about the village she now resides in, and the way the beauty that should be available to all is kept away from the people by a barbed wire fence. It believes that, as Billy Bragg once put it so succinctly: “This earth was made a common treasury for everyone to share“. Thought provoking and thoroughly entertaining – but above all as real as can be – this is superb stuff from Ruth Theodore.

It’s not often, it has to be said, that you come to a folk club on a Thursday night and get encouraged – no, make that ordered – to scream “fuck it” at the top of your voice towards the end – it’s not often that both “Black Sabbath” and “Iron Man” are given snippets at such things, either. But then generally Hamell On Trial ain’t around.

The one with participation, “Halfway”, is a vicious put down of the music magazines. One which contains the majestic line: “that the majority of their readership has the IQ of well a Creed fan.” It’s something of an irony, in that context that I first came across Ed Hamell in a magazine. I heard his song “Judy” on a free cd on Uncut in the early 2000’s and was hooked instantly.

It’s ironic too, because HOT isn’t the sort of artist who fits in easily. Vicious songs (“there are 17 murders on my new album – fuck you Nick Cave” he jokes here) and a set permeated with jokes, stories and spoken word pieces (the two poems he recites are incredible), he is a performer that stands alone.

He’s here with his songs in the stripped down form you imagine they were conceived. “The Chord Is Mightier The Sword” stays the tattoo on his left arm – and this acoustic tonight really does kill fascists.

“Safe” one of a clutch from last years wonderful “Tackle Box” sounds better here, “Happiest Man In The World” is one which showcases his delivery, his use of language, which is totally unlike anything else around.

For all the kidding around – and he is a genuinely funny guy – there is none more passionate. Listen to him deliver “Aretha Not Respect (Cops)” and then dare tell anyone he isn’t absolutely vital to today.

By request, he plays “I Hate Your Kid” and a magnificent “John Lennon” and if you ever needed a love song called “Whores” then now you got one too.

His new record “The Night Guy at the Apocalypse Profiles of a Rushing Midnight” might be one of the best of the year, but is represented just once, by “Melting Snow (Kill Em All)” and there is a rare moment of tenderness with “Ballad Of Chris”. The best songwriters though, change gear. And Hamell On Trial absolutely is that – but as he notes wryly in his closing freak out (and there’s no other way of putting it) of “Meeting” “all you ever see on YouTube is the bit where I do my “face solo” (although it has to be said that the moving his cheeks the way he does is impressive…)

He’s part punk, part political singer songwriter, poet, artist and comedian, and that barely scratches the surface. Ed Hamell is a force of nature, and you know all those other artists that say they’re unique? They aren’t. Because they aren’t Hamell On Trial.