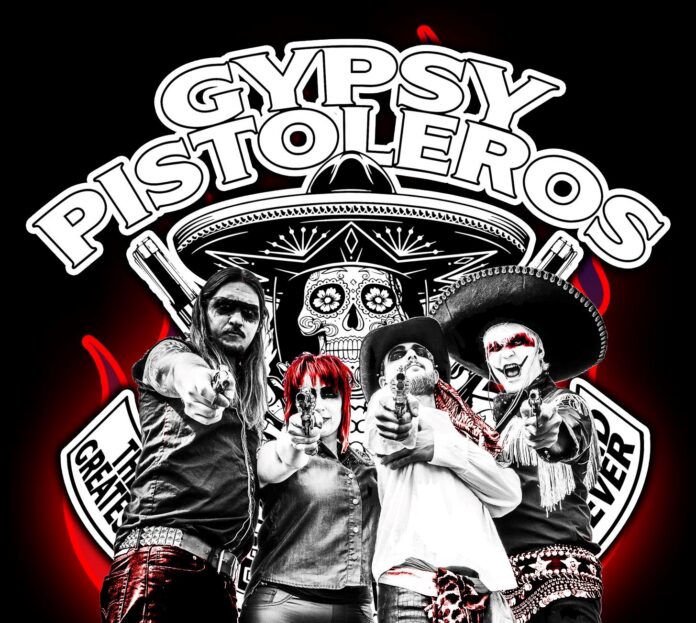 Gypsy Pistoleros have now moved onto the main Off Yer Rocka roster with the next releases exclusively to this branch of the lavel. The new single will be released in October 2022 on CD & Vinyl.

Gypsy Pistoleros have burst onto the rock scene with their unique Flamenco Rumba Punk Rock n Roll Rock sound & style, one of the most exciting new bands around, wowing everyone that comes into contact with them.

2022 Shows with more dates to be added!
*Confirmed so far below*

Gypsy Pistoleros may be best described as being the ideal house band for the fictitious Titty Twister bar of Rodriguez’s From Dusk Til Dawn. Between the nods to Morricone’s tense, tumbleweed atmospheres and the Gypsy Kings’ manic Latin energy, a New York Dolls raw glam-punk spark and a surplus of prime G ‘n’ R attitude!

The sound is flamenco & rumba in a head-on collision with punk/rock riffs, pounding bass and thrashing drums. The songs span madly in the best rock ‘n’ roll tradition with big hooks, attitude, and sleaze. Yet those flamenco breaks got into your head and refuse to leave – this unique hybrid rocks.

Gypsy Pistoleros are best described as being the ideal house band for the fictitious Titty Twister bar of Rodriguez’s From Dusk till Dawn.  Between the nods to Morricone’s tense, tumbleweed atmospheres and the Gypsy Kings’ manic Mediterranean energy, a New York Dolls raw glam spark, and a surplus of prime G ‘n’ R attitude, the Pistoleros‘ sonic style is captured to the full with the release of the album they always threatened!