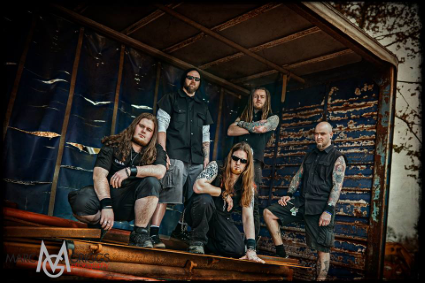 Following shows at Download Festival, Hammerfest and UK tour withHellYeah – one of the UK’s best melodeath bands close the chapter on one era and prepare for the next.

‘Beyond Reprieve’ by London, UK metal act GRAVIL is the new music video from the band’s critically acclaimed album ‘Thoughts Of A Rising Sun’.

Frontman Grant Stacey reflects back on what has been an exciting and fruitful journey since the band released their 2nd album – “We were blown away by the reaction to ‘Thoughts Of A Rising Sun’, it was one of those moments where we took the opportunity to make what we felt was our best album to date and then step back to watch things unfold.”

GraViL are currently in pre-production for their next album release with the band again working with producer Dan Alba (Voices, Sarah Jezebel Deva) .“The material has got to be right, the songs have to be the best we’ve ever produced – that goes without saying. ‘Beyond Reprieve’ is one last bloody love letter from us to you before we move onto the next chapter of GraViL. Bring on 2015!” roars Stacey.