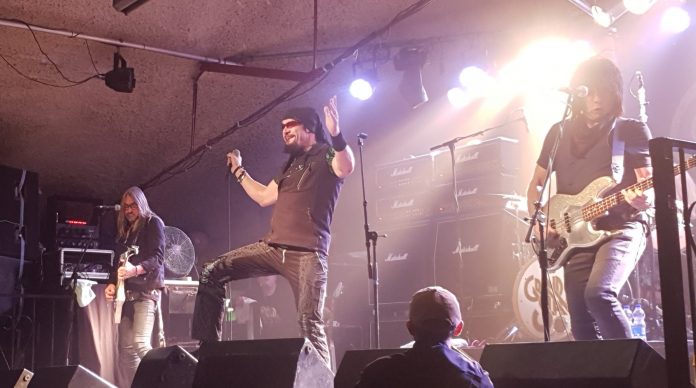 Hell’s Addiction have a song called “We’re On The Road Again”. It sort of sums up, really, life on tour for an underground band -and they probably wrote it with nights like this in mind. Dank, drizzly, midweek in the Black Country, it probably isn’t what the Leicester mob dreamed of growing up. I am prepared to bet, though that to HA every night is the Sunset Strip in LA given the sound of things like “We’re On Fire” and “The Way I Feel”, which is like some cross between Skid Row, Guns N Roses and some good ol’ fashioned Brit grit and determination. The band seem to be gearing up for next year – like a lot of artists at the time of year – and of the smattering of new songs they play, then “Upside Down” and “Save Me” have a real quality to them. The ending tune, “Running Away” is more melodic than the rest, but it is indicative of a band that clearly has plenty to offer, and the fact they appear to be the sort of group that – were they not playing here  – would be in the crowd watching, only adds to the mix. 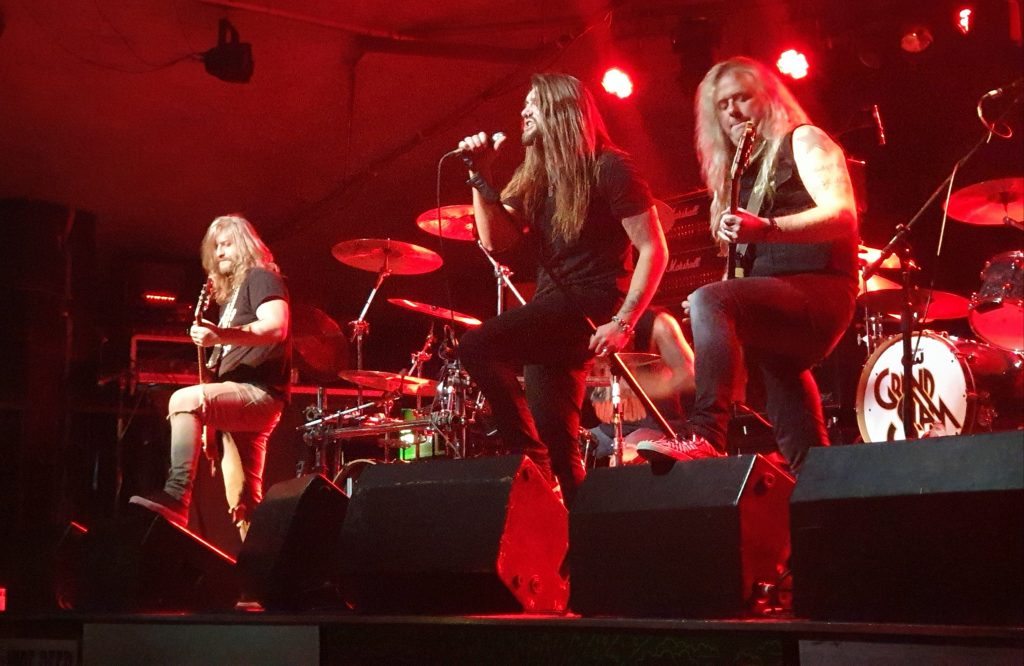 When Mike Dyer stops, about halfway into this set, right before Grand Slam play “Hit The Ground” and says to the Robin 2: “You might have heard this one, it’s the title track of the new album, we are really proud of it,” you almost wonder if they had any idea, when they went into make it, just how good it would turn out.

It’s odd to see them, so soon after reviewing the thing, given that I spend a hell of a lot of the last few days listening to it, but like the album itself the live show is really from the top draw.

Leaving aside the songs for a minute, there are moments – particularly on “Grand Slam” itself, where you listen to Laurence Archer playing the guitar and you think: “crikey he’s good”. Then there’s Dyer himself. Something of an enigma, not the normal rock singer, but his voice is superb and goodness, with his stage background he can’t half carry a tune.

And if you are going to front what started out as a band that Archer formed with Phil Lynott, then fair do’s you’d best be good.

For an hour and a quarter here, they really, really are. Like the album, it’s a mix of old and new, but all given a fresh twist. “Nineteen” is typical. Hard edged, with a message, but catchy and accessible as you like, “Military Man” – originally performed by Gary Moore – and “Crime Rate”, both written in the 80s are still rather too relevant in the current climate for my liking, but “Crazy” lets its hair down alongside.

There are a couple of gorgeous ballads too. “Long Road”, clearly high on emotion, and “Sister’s Of Mercy”, while inbetween is “Dedication” the song that Archer and Lynott wrote and which is a stonewall classic still.

“Gone Are The Days” is rather strangely played twice, both in the main set and the encore, but there’s no disguising the fact that Grand Slam are truly a great addition to planet rock.

It’ll be interesting to see where this goes, and where the long road, if you will, will end up, because such is the class here, you simply can’t imagine this being a one off.