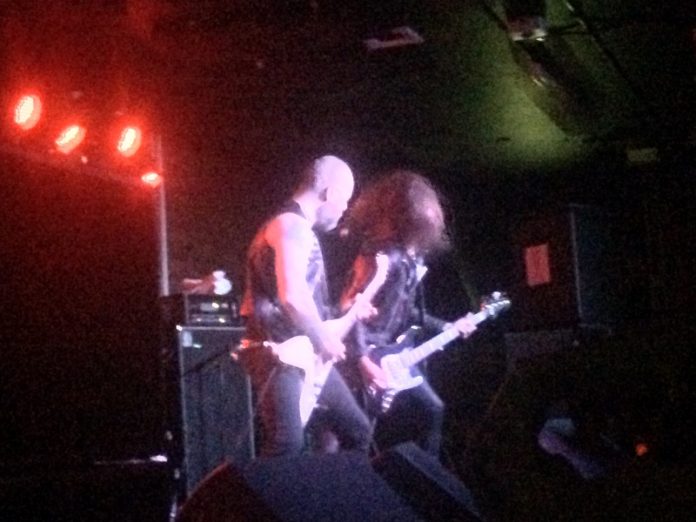 Some truths are self-evident. So it is that when Planet Of Zeus singer/guitarist Babis Papanikolaou  suggests that “all we know how to do is play rock n roll and have fun,” Wolverhampton already knows. They have, after all already played two songs by this point. Any debate about whether they play rock n roll or indeed have fun is rendered superfluous by the fact that one of these is the mighty title track of last years “Loyal To The Pack” album. A superb record, it provides other highlights here. The excellent “Little Deceiver” and the hedonistic “Your Love Makes Me Wanna Hurt Myself”. The last couple switch gear and come squarely from the heavier end of their material. “Vanity Suit” crushes but even that is made to look puny by “The Beast Within,” as livewire guitarist Stellios Provis takes over. There was a suspicion, with their lack of image and no frills rocking that Planet Of Zeus’ natural habitat was the stage. Here they proved it emphatically.

In a similar vein, Grand Magus are as unfussy and uncomplicated as it gets. They believe that heavy metal should be heavy and metal, they write songs about Norse Gods and without fail, each one can cheerfully have you raising your fists in the air and/or putting your devil horns in the air.

Over the course of the last 16 years, the three piece have built up a devoted following, and as frontman JB jokes here: “we were last here two years ago, you’re definitely louder than last time, its just us that has got worse….”

Since that last time the three piece have stuck out a new record, “Sword Songs”. That is very much a case of the more things change, the more they stay the same, though. Like all the greats from AC/DC to Iron Maiden and Status Quo, Magus have a signature sound and they ain’t about to change it.

The three “Sword Songs” urmmm, songs that are aired here fit in perfectly. Especially “Forged In Iron – Crowned In Steel” and “Freja’s Choice”, which are the perfect snapshots into what they do.

Which essentially is rock. A lot. Over mighty riffs.

Quite simply there is not a band that does this type of heavy metal better than GM. And they are happy to mix the new stuff with some genuine crowd pleasers, like “Steel Versus Steel” (which is one of the fast fist pumpers) and the headbanging thrill of “Like The Oar Strikes The Water.”.

“Kingslayer” (the kind of fist pumper that works best with an angry look on the face and through gritted teeth) sends us hurtling to an encore, which explains all about the band and their live shows. “Silver In Steel” (there’s a lot of steel when dealing with Grand Magus) is all very well, but everyone has been waiting for “Hammer Of The North” all night. There’s one of the “whoa, whoa” type sections in it – the sort that sound ace at festivals but could be given a Viking funeral on a Thursday night. That the crowd not only do it, but also continue doing it as JB, leather clad bass player Fox and drummer Ludwig take their bows, shows how much these songs mean to people.

It’s like this. Tonight a song called “On Hooves Of Gold” was played, and no one – on stage or off – thought it remotely strange. Grand Magus couldn’t be any other way if they tried and no one here wants them to change anyway.