“From AC/DC to ZZ Top. From a sold out concert to the record shop. This is who we are. This is what we do”. Let’s consider those words shall we? They form not just the key couplet in “Born To Rock N Roll” – the song with which Gin Annie always end their sets, but the key to what makes the band ace. They’re not doing anything to reinvent the wheel and that’s their strength. They’re doing what they love. If ever there was a band who epitomised the idea what if they weren’t on stage they’d be in the crowd, it’s these five. And Gin Annie are damn good at it too. Local bands don’t generally possess songs as good as “New Bad Habit”, nor do they crunch like “Falling” or have the right dollop of sleaze that is suggests “there’s a reason I don’t feel alone, she’s lying here next to me” – and still not know who “she” is. Current single “Chains” is a leap forward and if you had to back a band to be the next to follow Stone Broken and The Bad Flowers out of the West Midlands scene then, you could do worse than raise your glass in Gin Annie’s direction. 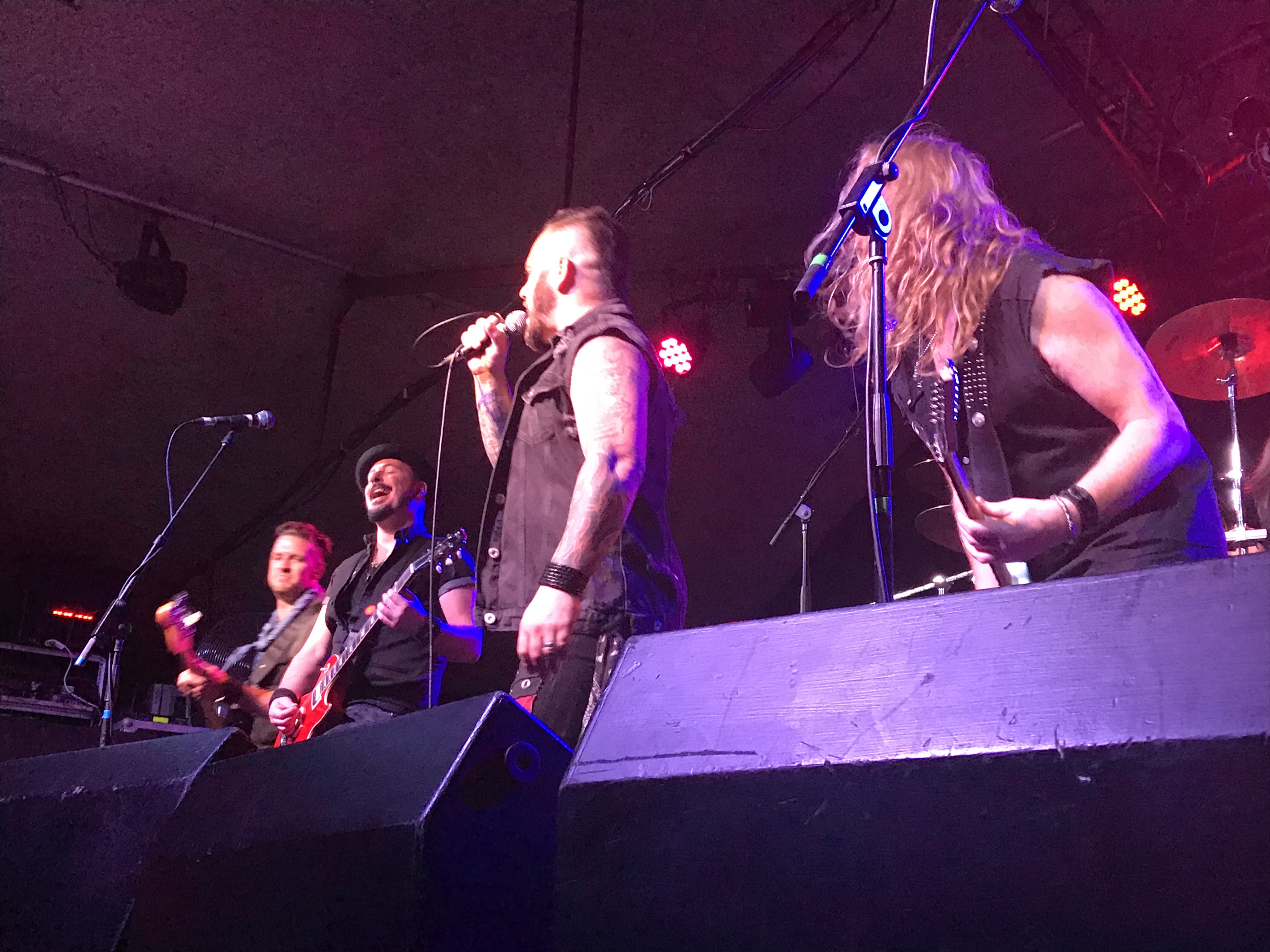 From the west of the Midlands to the East. Proper outlaw country, it seems because few years ago – just after I’d started doing the site properly actually – I got an album by band from those parts. I considered then and still do now, “Black River” to be the finest album ever made by an unsigned band and pleasingly, the world caught on and they have a deal and another couple of albums that proved “….River” was no fluke. This, though, rather oddly is the first time I’ve ever seen them live. And they don’t disappoint. “Over And Over” is bluesy rock n roll done right, while Phil Poole mixes his rather odd dancing style with a primal roar that comes from his boots and rather suggests he was born to front a rock band. He’s in full effect on the glorious “Tale Of A Broken Man” (“its about my experience with marriage, but I’m alright now I’m divorced….” he offers). The title track of last years “Hard Times” is proof of their progress, “All That I Have” thinks it’s in an arena, while “Bring You Pain” crackles. Good things come to those who wait apparently and I don’t mean me taking three years to see them. No, rather that Doomsday Outlaw are due. 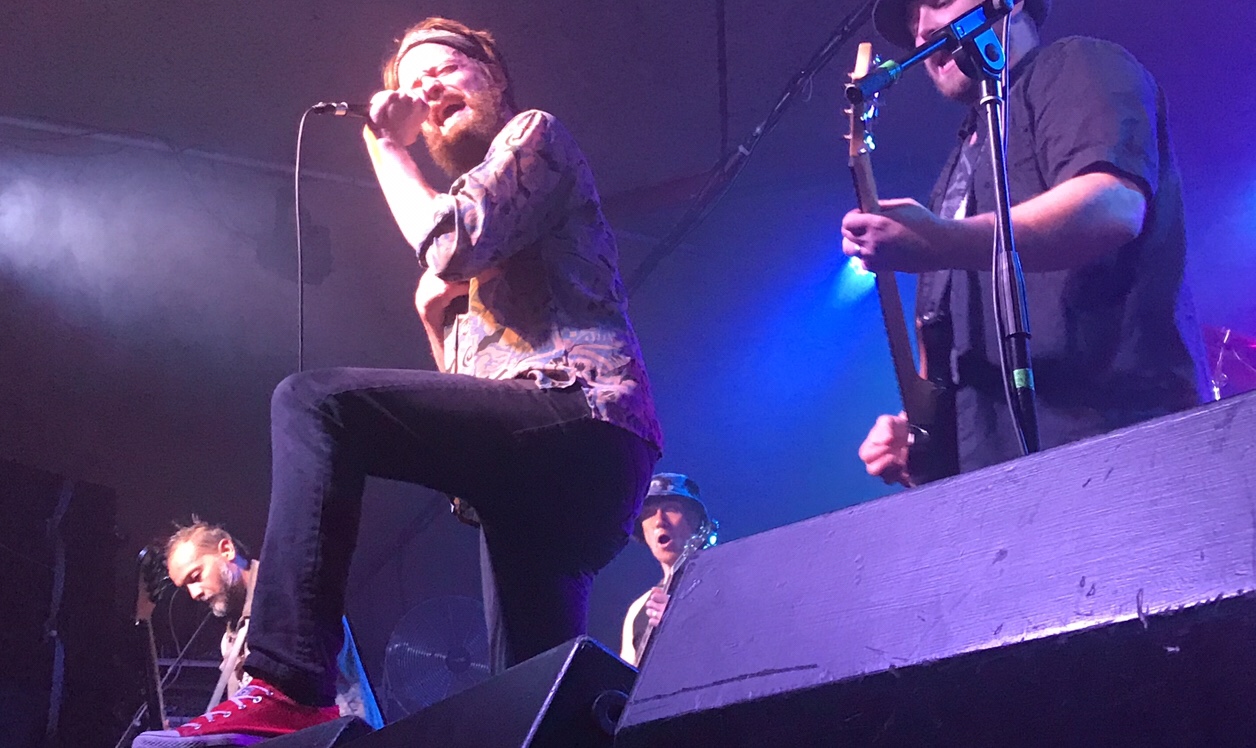 His appearances on the Schenkerfest tours and recent album seemed to have reinvigorated Graham Bonnet and he seems positively full of beans as he marches out here. Why wouldn’t he? Preaching to the converted, the 70 year old is able to begin with “Too Young To Die, Too Drunk To Live” – one of a clutch of Alcatraz songs he plays. Of these “Jet To Jet” is the pick perhaps, while the fact that “All Night Long” and his own “Night Games” are also shoehorned into a breathless start give a clue as to how storied a career Bonnet has had.

Here tonight with his latest band. keyboard player Jimmy Waldo and drummer Mark Benquechea represent the long standing, guitarist Kurt James the fresh, and bassist Beth-Ami Heavenstone all blend to give this a modernity and their skill allows them a fresh take on MSG’s “Rock You To The Ground” which becomes a real highlight as James cuts loose.

Indeed that seems to signal a bit of a switch of gear. “Stand In Line” – a dip back into his album with Chris Impellitteri – chugs mightily and it is noticeable how much fun the band appear to be having on stage and how relaxed Bonnet seems. He even mentions summers with his grandparents after the nostalgic “Starcarr Lane”

“Desert Song” is a change of pace, coming after the frantic “Goodnight And Goodbye”. “Into The Night” thunders and after a James solo there’s one of the new “Meanwhile, Back In The Garage” album’s most interesting cuts “Long Island Tea”- in truth, it might have been good to hear more of the new and less of the history. As good as “Assault Attack” might be, it’s not one of this bands tunes. “Mirror Lies” is and things are better.

But that’s me, and the assembled throng get what they came for and “Since You’ve Been Gone” makes its appearance, as does “Lost In Hollywood” to close things down.

At his time of life – he’s been 50 years in the business – Graham Bonnet has earned the right to do what he pleases, and if that doesn’t include playing new songs then so be it, he and his audience enjoyed themselves immensely, so job done.